The archer is among the most fragile combat units, however he is cheap to deploy. A group of archers is useful for defense, as not only it is effective to repel swarms of unarmored units, but the archer can also dig the moat. Archers can also climb ladders, however they are way too fragile against castle garrisons.

Compared to the crossbowman, the archer has a higher fire rate and moves much faster. Despite his agility, the archer quickly becomes ineffective against armor and therefore should be only used as a backup unit in the early-game.

The archer has a mercenary counterpart, the Arabian bowman. Both units have the same movement speed and firing range, however the Arabian bowman has a little more health and higher rate of fire. The European archer is much cheaper though and can be recruited in higher quantities, provided the player has an adequate weapons industry.

Archers require a free peasant from the campfire and 1 bow with a sum of 12 gold to recruit. 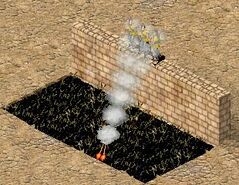 Archers lighting up some pitch with flaming arrows 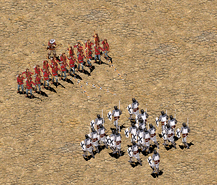 Archers trying to hold back the advancing swordsmen
Add a photo to this gallery
Retrieved from "https://stronghold.fandom.com/wiki/Archer/Stronghold_Crusader?oldid=21306"
Community content is available under CC-BY-SA unless otherwise noted.