The auxiliary archer is a ranged unit in the upcoming Stronghold Warlords game.

Auxiliary archers are a staple ranged unit that fires arrows from a distance. While able to man towers and walls with ease, the Chinese archer can also lay down concentrated fire with a volley attack in groups.

Archers also possess the ability of igniting gunpowder traps when near a brazier.

The auxiliary archer is trained at the barracks.

Archers are relatively undemanding units, requiring a bow from the armoury along with a limited amount of gold.

Just like in previous games, archers move very fast and fire arrows with a high rate of fire. Their projectiles deal moderate damage to unarmored units and very little damage to armor. They can fire from a longer distance than most other ranged units, however.

Auxiliary archers tend to make both a good defender and an acceptable attacker. They can cover huge distances from towers and on the ground alike, punishing melee units, and workers that are trying to gather resources. In groups, archers can also soften up marching units with concentrated fire.

Being a medium-tier unit, the archer suffers from low health. Unlike the auxiliary axeman, his armor can only absorb a few hits and projectiles, and he is hard-countered by the imperial crossbowman, whose bolts take him down in one fell swoop. His fallback melee attack with a knife is also inefficient against enemy footmen. 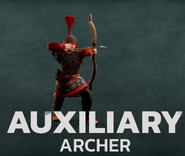 Add a photo to this gallery
Retrieved from "https://stronghold.fandom.com/wiki/Auxiliary_archer?oldid=21200"
Community content is available under CC-BY-SA unless otherwise noted.