The auxiliary axeman is a light melee unit in the upcoming Stronghold Warlords game.

The Chinese warrior is a melee unit that wields a battle axe. Outfitted in lightweight armour, he can run quickly forward and cut swathes in enemy ranks.

The auxiliary axeman is recruited at the barracks.

The auxiliary axeman is a cheap unit, requiring an axe from the armoury and a moderate amount of gold. He runs about just as fast as the spear tribesman, yet has higher damage output. The axe can quickly dispose of units that wear no armor, and deal considerable damage to medium armor.

With his medium armor and high agility, the axeman can harass effectively, while capable of withstanding attacks for a limited time. He also makes a niche guarding unit and in groups, he can run down vulnerable ranged units.

The auxiliary axeman has higher health than most unarmored units and can absorb a number of arrows. His effectiveness is however limited against heavy armor, traps and most notably, imperial crossbowmen, whose penetrating bolts make short work of him. 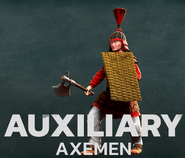 Add a photo to this gallery

Retrieved from "https://stronghold.fandom.com/wiki/Auxiliary_axeman?oldid=21284"
Community content is available under CC-BY-SA unless otherwise noted.