Berserkers are Viking warriors armed with a labryc axe. They are very fast and deal a large amount of damage.

When in battle, these troops should be used carefully, as the cost of 80 gold makes them expensive to replace. Olaf especially likes to create large amounts of them and siege enemy with them. Even if they are strong, they are very weak to missile fire due to wearing almost no armour and cost a lot for a melee unit. But a lot of these can really change the outcome of the battle.

If you choose to use these troops, you should eliminate missile troops first before moving them in as by the time they get to the lord while being hammered by missile fire, they will be all but destroyed. They can take out most troops in melee combat but again, they don't have the world's best defense stat so just be careful. Berserkers are useful for harassing because of their powerful melee strikes that can cut down troops defending estates. They are also useful for damaging the economy of the enemy by destroying buildings and killing workers.

Remember though, do not use these troops until there are no missile troops left otherwise the berserkers won't last long.

For the quotes of the berserker, see: Quotes:Berserker. 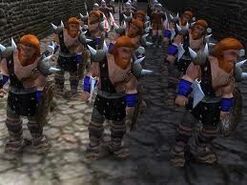 Attack Berserker
Add a photo to this gallery

Retrieved from "https://stronghold.fandom.com/wiki/Berserker?oldid=15642"
Community content is available under CC-BY-SA unless otherwise noted.