The catapult is a medium to long range mobile siege weapon that uses heavy rocks as ammunition. It is mainly created to destroy castle walls, gates or towers.

Catapults are considerably cheap and effective in bringing down buildings and units. They have decent fire rate and their low arc comes with good accuracy, marking the catapult a reliable offensive weapon. Their rocks cause heavy damage on structures and on units, as they are capable of killing most of them in one shot. Catapults may also hurl carcasses from a distance to spread disease in a selected area.

However, catapults are fairly big and slow, and they fall from concentrated missile fire or melee attacks, so they need support from friendly units. Portable shields can greatly increase their resistance against missile fire, while a fire ballista or some missile units can provide covering fire.

In Stronghold and Stronghold Crusader, catapults have their own stone supply, initially 20 rocks. When they run out of rocks, they cannot fire, so they must be supplied continuously. Each 2 rocks take 1 stone away from the stockpile, and multiple catapults may be supplied with one click. When a group is selected, supplement may be provided up to 20 rocks per catapult. When a single catapult is selected, each click will supply it with 20 additional rocks. Two engineers are needed for a catapult.

Hurled stones will kill units and siege engines instantly. They can even hit civilians such as mothers, children and drunkards, who simply disappear without any death animation.

In Stronghold 2, catapults are instantly created in the engineer's guild or the siege camp and they are automatically supplied with engineers. They have an infinite supply of rocks and they have much better accuracy. They also move about twice as fast when not moving in open order.

Catapulted stones hitting a unit will cause it to fly rather than die, who suffers damage from the stone and an additional damage upon landing, determined by flying distance and height difference. Units near death may collapse from incoming stones rather than fly away. Soldiers landing in forests or rivers also die instantly. 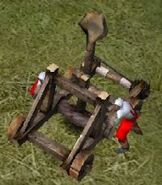 Engineer detachment, heading out!
Add a photo to this gallery
Retrieved from "https://stronghold.fandom.com/wiki/Catapult?oldid=18120"
Community content is available under CC-BY-SA unless otherwise noted.