Similar to the tower ballista, its bolt deals tremendous damage, taking out armored troops with only a few hits. Its flaming arrow also causes significant damage to buildings, which can be set on fire when damaged enough.

Fire ballistae track movement, so they are very reliable and fire with a high rate of fire.

In Stronghold 2 and Stronghold Legends, portable fire ballistae do not fire automatically. Their target must be manually assigned, even when set on 'aggressive stance', so they are more useful for offense purposes rather than defense. Tower ballistae retained automatic fire, however.

The fire ballista fires flaming bolts, meaning that it can easily set fire to a whole fortress if it sets ablaze to a building inside it. Some players, before lighting up a castle, usually take care of the wells to be sure nothing will put out the fire.

Fire ballistae can be used as a efficient castle defense, when placed near the walls to take out any siege machines and advancing armored troops. For this purpose one Fire Balista can give high milage when keeping swordsmen out.

A large force of fire ballistae can be difficult to beat, the main thing that should be done is keeping out their visual range (hiding behind walls, large rocks) and attacking with fast infantry (macemen or knights are good). The best defense against fire ballistae are towers filled with crossbowmen, catapults, or another fire ballistae (fight fire with fire). Regular Balistae work great and outrange their fire counterparts and actually beat the fire version one on one (assuming no player intervention). 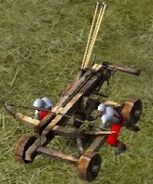 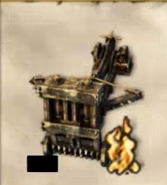 Add a photo to this gallery

Retrieved from "https://stronghold.fandom.com/wiki/Fire_ballista?oldid=22183"
Community content is available under CC-BY-SA unless otherwise noted.