The fire lancer is a frontline gunpowder unit in the upcoming Stronghold Warlords game.

The fire lancer is a close-combat unit, who wields a wooden lance, with a satchel full of gunpowder attached close to the tip. When fired, the lance combusts its ammunition, creating a burst of highly damaging fiery beam in short range.

The fire lancer is trained at the military academy.

Fire lancers are expensive mercenaries, requiring a good amount of gold to hire.

These units have light wear, hence they move very fast and can rush straight up to their destination. Fire lancers can discharge gunpowder at very close range, which deals continuous damage to any unit caught in the flame and after a while, they may even ignite them. The satchel needs to be recharged for a short while to attack with again.

The fire lancer has a dual purpose, being a short-ranged unit. He works best in the field as a second line, taking position directly behind the frontline, from where he can rain down his devastating flames. He also makes a decent defender, making units fear to directly assail walls and towers with their pickaxes.

Despite being an expensive unit, the fire lancer is very frail and his combat effectiveness is severely limited by his range. Should he get into a melee combat, he will retort from using the flame attack and fight with his staff, often ending in catastrophy for the fire lancer. 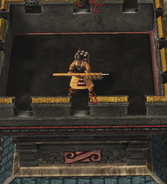 Add a photo to this gallery
Retrieved from "https://stronghold.fandom.com/wiki/Fire_lancer?oldid=21233"
Community content is available under CC-BY-SA unless otherwise noted.