Olaf Grimtooth (aka the Last Viking Warlord) is a character appearing in Stronghold 2. He is also featured as an AI opponent in Kingmaker mode.

Brutish and Norse in origin, Olaf is a tall and muscular person, wearing a Viking outfit of a horned helmet, leather armour and a war axe. Olaf is always seen in his war suit during the cutscenes.

Olaf is a cruel and relentless mercenary, who revels in skirmishes and slaughter. He enjoys pillaging villages and killing the innocent, showing no mercy. However, his greed for gold is more important for him than his lust for carnage, working only for "blood money". He is also very religious, calling on his Nordic gods to aid him before a major encounter or during combat.

Olaf is the last Viking warlord remaining in charge of his own clan, after the Vikings were chased out of England. He is a relentless skirmisher, who pillages villages and commits large killings in the process. His position is not challenged for several decades, as Matthew Steele remembers him ransacking over his childhood place. He is paid large sums by Lord Barclay, which he uses to fund his war campaigns.

Olaf is hired by Barclay and the Hawk on another job, after Sir William and Matthew Steele flees Barclay's castle. He proceeds on scouting Steele's encampment near Friar Jacob's monastery, however he judges that only a few men would be sufficient for the siege, while he continues his campaign. His carelessness proves to be fatal, as Steele kills his vanguards and moves forward.

Olaf contacts Edwin to kidnap and hand William over to him, in return for gold. Edwin successfully lures William to the trap. After the handover, Olaf is also bargained by Edwin to return half of it, if he disposes of Steele. Olaf immediately sails to Steele's castle with a small contingent. He tries to siege the fort along with The Bull, but fails to do so and leaves.

Using William, Olaf forces Steele to come to Friar Jacob's monastery by lighting it up and ransacking it, stealing most of the artifacts found there. Steele swiftly launches a siege against Olaf's war camp, which forces Olaf to leave behind his gains. As Steele closes in, he attempts to hang Sir William, but Steele intervenes, saving his master. Steele then stays back with William to rest and successfully defends against Edwin's attacks.

Olaf does not get far however, as his galley gets stranded on Edwin's lands. He builds up a foothold, but Steele travels there to deal with him and Edwin at the same time. He finally meets his end here, once Steele's troops kill him in his own settlement.

Olaf is known as an aggressive and unique player in Kingmaker. He produces Viking units to overwhelm his enemies, building a basic economy and defenses to concentrate on the offensive.

Olaf's castle is reminiscent of the Sultan's castle from Stronghold Crusader. His Saxon Hall is surrounded by a large circle of wooden pallisades, featuring wooden platforms at regular intervals. The castle has two entrances and the wall is guarded by axe throwers. Most buildings are placed inside the castle.

Olaf's economy is very simple and focuses on profit. He places many sawpits and iron mines and produces apples and meat. He also grows hops to support an inn for popularity and places several poleturners to make spears to be sold.

Olaf's troops are limited in variety, but strong. He uses the only two Viking units for combat, which complement each other well, however cost a lot of gold to fund. 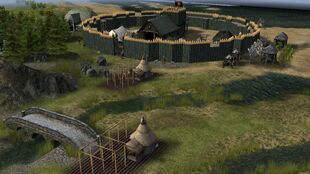 An overview of Olaf's settlement
Add a photo to this gallery

For the Kingmaker quotes of Olaf, see: Olaf Grimtooth/Quotes

Retrieved from "https://stronghold.fandom.com/wiki/Olaf_Grimtooth?oldid=19564"
Community content is available under CC-BY-SA unless otherwise noted.