Pikemen are heavily armored units with high health. Their armor affords them adequate protection from arrows and crossbow bolts, and also high survivability in melee combat.

A pikeman requires a free peasant from the campfire, 1 pike, 1 piece of metal armor stored in the armory and 2 honor with a sum of 20 gold to recruit.

Pikemen perform superb in tying up units at narrow chokes and inside buildings. Their average speed also enables them to reinforce critical positions. In the open, pikemen may intercept and hold up units if the enemy lacks ranged support.

Pikemen can also be effective at surviving traps, such as pitch ditches and killing pits, and therefore it is useful to send them in the frontlines during a siege.

Compared to other armored units, pikemen are not fairly durable. Beyond his susceptibility to concentrated volleys, the pikeman also falls short in melee combat over time. Due to his low attack damage, the pikeman has trouble killing even lesser troops. 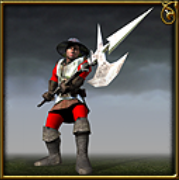 A Pikeman on the road.

Pikemen guarding the keep.
Add a photo to this gallery
Retrieved from "https://stronghold.fandom.com/wiki/Pikeman/Stronghold_2_%26_Legends?oldid=20496"
Community content is available under CC-BY-SA unless otherwise noted.