Pikemen are heavily armored units with high health. Their armor affords them good protection from arrows and crossbow bolts, and also high survivability in melee combat. Compared to other troops, pikemen have relatively poor attack strength, but can match other troops in combat when used in groups. They can also dig or fill in a moat.

A pikeman requires a free peasant from the campfire, 1 pike and 1 piece of metal armor stored in the armory with a sum of 20 gold to recruit.

These units are best used for tying up large formations of enemy soldiers and blocking access to important parts of your castle and keep. They also perform well in the initial stages of a siege, filling in moats and pushing the enemy from the walls and gatehouses.

Pikemen are also fairly resistant against traps, such as pitch ditches and killing pits.

Although pikemen are pretty durable, their combat efficiency is severely limited in open battles. Their inability to dish out considerable damage relegates their role to a frontline unit, and not even armor can protect them from catapulted stones and rocks.

A Pikeman battling a monk 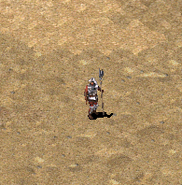 A Pikeman in the desert.

The Pikeman as shown in the barracks menu.

A Pikeman celebrating his recent victory.

A Pikeman taunting his enemies.

A sentry in the Stronghold introduction.
Add a photo to this gallery
Retrieved from "https://stronghold.fandom.com/wiki/Pikeman/Stronghold_Crusader?oldid=20497"
Community content is available under CC-BY-SA unless otherwise noted.