Hold Ground: defensive stance that deals high damage to cavalry, at the cost of movement

Pikemen are heavily armored units with high health. They are among the most durable unit in the game, being able to withstand considerable punishment in close combat and from ranged attacks alike.

In Stronghold Crusader 2 pikemen gain an ability called Hold Ground. When used, the soldier switches into an immobile defensive posture and gradually extends the pike forward. Any cavalry coming in contact with the tip of the pike receives huge damage.

A pikeman requires a free peasant from the campfire, 1 pike and 1 piece of metal armor stored in the armory with a sum of 10 gold to recruit.

Pikemen perform superb in tying up units at narrow chokes and inside buildings. They can block off a point when using their defensive stance and they can effectively stop the rare cavalry rush into the center of the army.

Pikemen can also be effective at surviving traps, such as pitch ditches and killing pits, and therefore it is useful to send them in the frontlines during a siege. Due to his abysmal speed however, he takes considerable time to form up.

Due to his heavy armour, the pikeman is one of the slowest units in the game, which severely limits his impact in direct combat. He is also unable to kill other units with the same effectiveness as most other melee units.

Pikemen also take a lot of time to get to another point of the map, as well as other ranged units can easily run away from them and fire at will. Crossbowmen groups can also finish off pikemen before they could reach them. 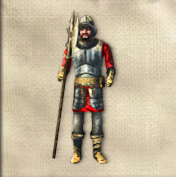 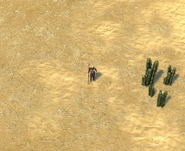 Pikemen guarding the Lord.
Add a photo to this gallery
Retrieved from "https://stronghold.fandom.com/wiki/Pikeman/Stronghold_Crusader_2?oldid=20554"
Community content is available under CC-BY-SA unless otherwise noted.