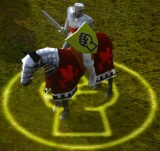 Sir Percival is a special unit of the Round Table in Stronghold Legends.

Sir Percival is a deadly knight with an even more lethal special ability. He carries the same attributes as a knight: high damage, thick armor and he can mount a horse to gain an incredible boost in speed.

Percival has a recharging ability called 'Holy Blast', which creates a huge shockwave and knocks out small units, killing most of them (even swordsmen) caught in the blast. Flying units are also vulnerable to this blast, only the mighty frost giant can withstand this huge blast.

Percival's ability makes him a very all-round unit, seeing usage in both defense and offense.

He can stand on the castle walls and towers, waiting for a potential target. Masses of tough units are preferrable targets, but he can also 'snipe' other special units or siege equipment from a distance. He does not even need to be positioned on an elevation, as he can cast his spell through any obstacles.

But, Percival proves to be more useful in sieges. He can use his ability to remove a great clump of the enemy defense, for example big groups of archers or crossbowmen, opening that section for a ladder attack or allowing friendly units to get closer.

Percival is quite durable, but he can be killed as well. He is very exposed to fire when he has lost his mount and concentrated missile fire or a good-sized melee army can easily defeat him, partiularly when his spell is recharging. When wandering around buildings, Percival must worry about bat attacks, which can cause such an explosion that Percival flies into a building, dying instantly.

Retrieved from "https://stronghold.fandom.com/wiki/Sir_Percival?oldid=14600"
Community content is available under CC-BY-SA unless otherwise noted.