The Duke of France

The Duke is a character and AI opponent in Stronghold Crusader 2.

"Having been raised in the French Royal Court, The Duke exudes arrogance. His castle design is more free-form than most featuring multiple layers of wall and nasty killing zones. In attack he uses conscripts to test your defenses before following up with swordsmen protected by rangers. Dangerous? Mais Oui!"

The Duke is a French royal noble, who tries his luck in the Crusades. Driven by the "grandeur et gloire", the Duke really wants to get his share from the conquest. He is very wealthy and influential, leading his armies with might and lust for power.

The Duke is a typical snobbish character, with the heart of a devoted fighter. He is somewhat young, wearing metal armour and has a long hair. Granted his status, the Duke speaks with a high, soft voice, which often pairs with arrogance and belittling. The Duke is particularly spoiled and stubborn, being disturbed by even the slightest sight of commoners and failure. He condemns the player heavily when taunting, but also refutes him as an ally. Overall, the Duke is an obnoxious character in person.

The Duke is an offensive character, who uses a little variety of troops in order to amass them in greater numbers. He favours fairly mobile units in lieu of an effective defense.

The Duke's castle designs are different from most characters. He separates the castle into small tight blocks, which are entirely surrounded by walls, resulting in units and workers moving on the top of them. Numerous towers and barricades are found along the walls, all of which are manned with rangers. The keep is accessible via stairs and is defended lightly. The Duke's economy is well protected this way, sealing the numerous weapon workshops and breweries from harm.

The description sums up the Duke pretty well. He is fond of sending swarms of conscripts in an attempt to wreak havoc on industry lines, but he also sends more durable groups of rangers and swordsmen to fight. Organized attacks follow the same manner, in which case the Duke produces catapults to support the attacking vanguard from the siege camp.

For the quotes of The Duke, see: The Duke/Quotes 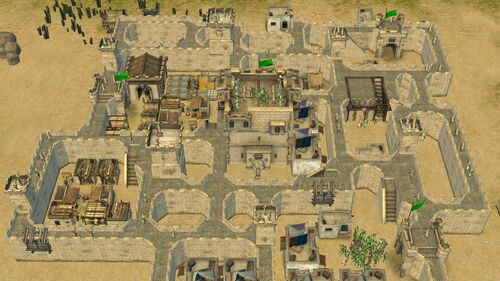 Retrieved from "https://stronghold.fandom.com/wiki/The_Duke?oldid=18614"
Community content is available under CC-BY-SA unless otherwise noted.