The Emperor of Germany

The Emperor is a character and AI opponent in Stronghold Crusader 2.

"The Emperor is corrupt and devious. His castles are grand and impressive, designed to intimidate his enemies. He likes to attack from a distance using trebuchets to take out your defenses and scouting parties to disrupt your resource chains. Overconfidence is his weakness."

The Emperor is an old political figure, who is bound to gain as much influence as possible. He is strongly suggested to have been a pope in his prime, who gathered a religious group of fanatics to lead. His motives include money, power and land, fueled by seeing a great potential in the Holy Land to exert total control. Backed by his zealots, the Emperor is confident in making his plans work.

The Emperor is a tall aged man, who is cunning and calculating. He wears a priest outfit with black ribbons that bear the Christian cross, indicating his former status a religious leader. He always has a sardonic smile on his face, whenever he is pleased with the outcomes or he feels that things are in his grasp. The Emperor speaks with a hard but cold voice, further expressing his confidence.

The Emperor puts his cause and his empire before everything else when talking to the player. He is mostly unaffected by failures, but he is quick to change his mood and reflect vengefulness when crossed. As an ally, he always addresses the Imperium as a political standpoint.

The Emperor is a balanced character, who builds large castles and uses an all-round mixture of troops. His durable but disruptive unit strategies are more of an annoyance and his attacks are not particularly deadly either.

The Emperor constructs circular castles with numerous square towers and entry points. The keep is surrounded by a small walling, which has a fortified passageway from the western gatehouse. All production buildings are found inside the circle, as well as archers and crossbowmen are spread out along the walls. Tower mangonels and ballistae provide additional defense against ranged artillery. The economy of the Emperor is also very solid: he has lots of weapons workshops while producing ale for employing high taxes.

Offense from the Emperor is conducted more in the harassment side rather than real offense. Swarms of conscripts are common, up to 100 a time, to be sent to seek and destroy vulnerable buildings. Organized siege camp attacks are relatively mild in numbers, but they feature heavy bombardment. The Emperor likes to attack with a mixture of pikemen and crossbowmen, sometimes supported by sergeants-at-arms to provide additional health. The siege camp produces mantlets for personal defense and catapults/trebuchets to create breaches in the wall line, from afar. 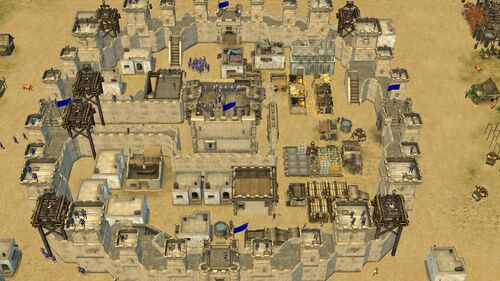 Retrieved from "https://stronghold.fandom.com/wiki/The_Emperor?oldid=16708"
Community content is available under CC-BY-SA unless otherwise noted.