The King of England

The King is seen wearing a plated outfit, with an animal as a crest. He also wears the crown on his head and a purple cape. He uses a sword in battle.

The King is an aged man, who rules with experience and benevolence. He cares much for his renown and the welfare of his people. Gifted with close-to-ideal skills in politics, he prefers peaceful matters over outrageous warmongering. The King trusts his subordinates to his fullest, to whom he also gives trust and respect to the fullest.

The King is a benevolent ruler, who settled matters in the country with lots of effort. He manages to preserve peace for five years and for the duration of his rule, he does not manage to stabilize the country to its fullest, due to warlords with seeking their own path. The King lives in a troublesome period, where he has to take care of his own matters even in times, when his subordinates fail to complete their jobs.

The King sends Matthew Steele to try and remedy some land in his country, when the three other lords that he has sent there - Sirs Edwin, William and Grey - fail to do so. He teaches Steele on chivalry and how to manage a castle, gradually giving more control to him as a Lord. Steele raises a beacon to discourage ships from sailing on treacherous waters, removes infectious diseases and rampaging outlaws, and puts down the extorting matters of Sir Edwin. The King praises him for his outstanding achievements and knights him. Eventually, he entrusts Steele to arrange and hold a big feast to celebrate this event.

The King is the approved ruler of England, who has mysteriously vanished. The precursing events to this originate from Pascal Deveraux. Pascal arranges his assassination to the celebration of his fifth year of peace, by poisoning his meal. To his demise, he barely survives the attempt, which makes him to summon his loyal advisor, Sir William. William however quickly sets off to a skirmish against Olaf Grimtooth, who was hired by Pascal to cause turmoil in order to lure William away. Remaining in charge of the Royal Guard, the Hawk sells all the weapons of the military, rendering it unable to operate. The court quickly is put into disarray, from where the still ill King is carried away by constable John Briggs.

From safety, the King keeps up-to-date with current events and recovers in Lady Seren's abbey. He contacts Matthew Steele through letters. Knowing that Steele helps William, but William carelessly trusts allies, he warns Steele to carefully choose his own partners. As Steele defeats The Bull and later Olaf, he grows ever larger in honor. The King eventually lifts William's title of Royal Champion and mantles it to him. This leaves William disheartened and ever more determined in repairing their bond of trust.

The King's location is revealed to William and Steele by Lady Seren in Edwin's castle, after the siege of the Hawk and Lord Barclay. William and Seren join him a bit later.

Matthew Steele and William sees the King after the Abbey is defended from Barclay's onslaught. While William is quickly set straight and told that he was never considered to be a traitor, Steele confronts him by telling that the populace thinks him to be a coward for his acts. The King quickly reminds him that being a king is not all about waging wars, but this act makes him show himself as living again.

The King then takes the action to Barclay's castle. He prepares a three-way siege, however he faces the clan McLoud. He kills their army and then breaks into the castle, forcing Barclay into submission. Barclay surrenders, who is then tried along with Edwin. They are sentenced to public humiliation, which the King and his court witnesses first-hand.

The King is opposed by a new adversary, Matthew Steele, who joins Lord Barclay's forces. Knowing his location, the two siege Seren's abbey successfully, but they cannot find him there, as he is quickly relocated to a more secure fortress. Gaining control over the church, Barclay titles him as heretic and spreads chaos among the country, forcing him to hide. However, he is soon hunted down and dies to the final assault from Steele, Barclay and The Hawk in his own castle. The crown is gained by Steele after the action.

The King is a very defensive lord. He prefers to build a very productive economy and build up a large force before attacking. His armies generally dish out little damage but prove fairly durable on the battlefield.

The King's castles are generally large with huge towers and thick walls. The castle has a large courtyard, where most buildings are built. Archers and pikemen guard gatehouses, towers and crucial wall sections. Some castle designs involve sally ports planted in the wall lines. Traps are not present among the defenses.

Better than anyone in the game, the King has a very productive economy covering all fields. He mines both iron and stone and produces every kind of food. He has pigs, vegetables and wine for the Lord's kitchen. He also places popularity boosters: a church with candles production and a traveling fair. Lots of workshops are also built to provide a steady supply of weapons.

The King's armies are of medium-quality and slow to build. They fall short to crossbowmen, but can take quite some time to defeat.

For the quotes of The King, see: The King/Quotes 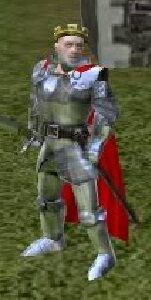 The King in game (red) 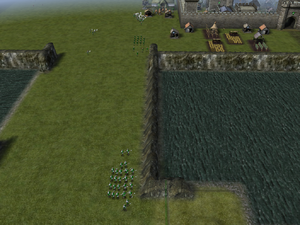 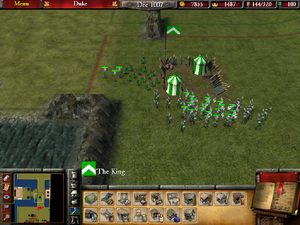 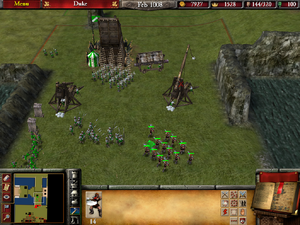 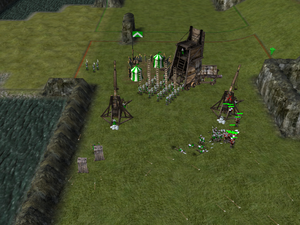 All siege engines in action
Add a photo to this gallery

Retrieved from "https://stronghold.fandom.com/wiki/The_King?oldid=21001"
Community content is available under CC-BY-SA unless otherwise noted.