Start a Wiki
This is mission 2 in the Stronghold Crusader 2 skirmish trail, Desert Heat.

Bend in the River provides much mayhem by the looks of it! You get two weak allies as distraction against the combined might of the Caliph, the Sultana and the Slave King. Two of the enemies will be right at your doorstep, while the two Rats are far away from you to assist. Resources are adequate, however you will need to fight on three sides to secure your position against early rushes.

This map plays out in a river bending, with a main island bordered by water and a long ridge drawing a line on the western and eastern border. Three players each are placed on either land, and each position has only one or no key resources at disposal. The outermost estates are the most defensible, yet the poorest. A long trail of iron ore is available for the Sultana, while there is stone for the teal Rat, you and the Slave King. Every estate bordered by the main river is interconnected with fords.

You get much more gold and resources than the AI lords, however your position makes you vulnerable to their offensives. You will need to fight for control in the oasis, securing your income from bread and or taxes through ale, while fending off the numerous rushes your adversaries would come up with.

Lay down the usual buildings: the stockpile near the stone deposits, and the granary close to the rear of the keep. You would want to erect basic defenses near the southwestern corner of your estate and the small ford facing the Caliph. Start bread production immediately and erect the mill, even though wheat would not come in right away (2 farms with 3 bakeries is optimal). Place a quarry with an ox tether to mine stone, with 6-7 woodcutters. 2 hovels will be needed to provide the manpower for our starting industry. 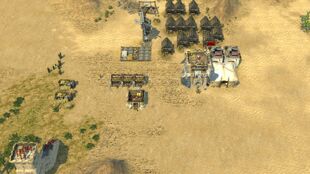 Starting economy and buildings
Add a photo to this gallery

With our remaining stocks, we can go either for European or Arab units. The barracks requires workshops in order to operate well, which is possibly not the go-to method this early in the game. Mercenaries on the other hand, are not really expensive to churn out in small quantities and we can set taxes to 2, with the granary providing three types of food for surplus popularity. The barracks can be built a bit later, when there is stone and wood for the armoury as well. Sell the hops, pitch, iron and whatever small stocks you find. Never sell your weapons!

Given we have a lot of stone, it is mandatory to set up at least one medium tower for defense. Mix up ranged troops with fodder melee units - the numerous slaves will most likely get through the weak firepower of your archers and head to the tower, killing them off. Your own slaves or conscripts are enough for the task. 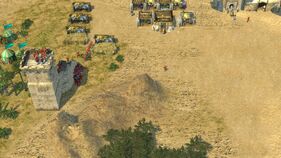 Tower on the southwest 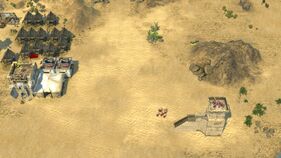 Tower overlooking the east
Add a photo to this gallery

The enemies will soon throw their first vanguard at you. The Caliph and the Slave King will bring their trademark slaves with slave driver support, while the Sultana will sneak in assassins. You will need to remove the archers by force clicking the ground in case hostiles come near! The Caliph's numerous slaves might require the Lord's help to deal with. He will be bruised by about a tenth of his health, but worry not - he can be healed later by a healer and he should not be used for any more attacks. Soon enough, the Slave King will follow up with another short-lived siege camp attack, but your archers should take care of them.

Extend your industry with bakeries and quarries so that you can erect additional fortifications, while selling bread to fund your military. We work with cheap troops so that saving up gold is not a concern as of now. You can get one or two Arabian swordsmen as bodyguards next to the Lord or the ranged units, in case you would find their defense insufficient. Men-at-arms are especially good against assassins, as their javelins soften them up quite a bit!

The enemies attacks will strengthen in a short time, introducing higher varieties of troops and increasing numbers. The enemy will send small groups of units, sometimes adding Arabian bowmen to the mix. The Sultana also likes Arabian swordsmen, so prepare your own defense and either attack them with a flock of cheap units or add your own Arabian swordsmen. Do not forget to add more ranged units to the towers, as well as keep small groups of units on the ground! Fast reaction to other positions might be required in case a few units slip through (the Caliph likes to attack from the Slave King's position as well).

The biggest pressure will come from the southwestern positions, as all three enemies will construct their siege camps as well. The teal Rat will sometimes come with a small force for attacks, however his actions will provide additional power to your troops. Although both Rats will ask for resources, ignore their requests, as they are too poor in combat and they will not be attacked much anyway. 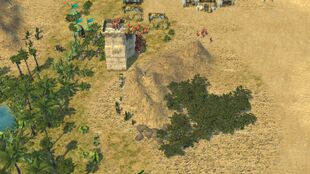 Extend your bread production and add more quarries for more income and towers. You can also start erecting walls along your eastern border: the Caliph will sometimes sneak his harassing troops up in the east. You can leave an empty tower and man it in case of such raids, as all your units are valuable. You can also start adding weapon workshops to your liking: poleturners and fletchers become very handy for reinforcing archers and men-at-arms in your defenses.

After some time, you will end up in a heavily fortified southwestern tower and a healthy economy. With your position stabilized, you can start massing your army. Pretty much every option is possible, but your best bet should be Arabian swordsmen, who have superb durability and perform well in combat. Since an army of them requires lots of gold coins (50 Arab swordsmen = 3000 gold), you might consider buying weapons for templar knights as well. Templars kill units better, but they require assistance - one thing your cheap units would provide.

Execution of a siege will provide no less difficult - a hard cap on your units will limit your resources and you might have to sacrice some units in order to get a quality army. Since the most difficult units you will encounter are Arab swordsmen and assassins, you would either want to consider bringing in heavy tools (siege equipment) as well, or create an overwhelming number of armored troops. A big group of ranged units is good as always in an attempt to soften up defenders on the walls and towers.

Your first enemy to siege should be the Sultana. She has a very good economy and her constant pressure with assassins makes her a constant burden on your tower. Fortunately, she is very easy to cripple. Notice how a narrow hill lies between her castle and yours: this position is ideal to make trebuchets work from here. Build 3-5 of them and have a strong presence of troops there. Although the enemy will not direct their attack on the trebs, some units might go rogue and dispose of them, which you want to prevent at all costs. 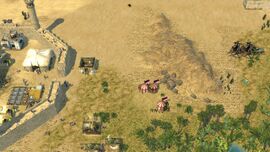 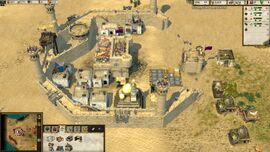 Fighting the Sultana
Add a photo to this gallery

The trebuchets will be able to target the granary and mercenary post, as well as the entire line of walls and defense towers. Let the trebs loose and have them hit whatever you might come across. They are quite inaccurate and slow to fire, so have them on autopilot until damage is done. Keep an eye on the other fronts and provide defenses as needed.

The Sultana will be unable to harass you or reinforce, while her post mercenary post is down. When enough damage has been done, send in your army and commence an attack, prioritizing the gatehouse (or a hole in the wall in case). The courtyard will swarm with mercenaries, as well as the keep has numerous defenders. Try to lure out small groups of units and steamroll them, while avoiding shots from mangonels and haybale launchers. If the attackers seem to thin out, just keep in sending reinforcements and your power should overwhelm the Sultana.

Going after the rest of themEdit

You might notice that even with the Sultana, the swarm of slaves and other attackers can be easily held back. Still, the absence of the Sultana makes it easier to lay a siege on the next enemy, the Slave King. Although by no means he is a hard enemy, his castle is very defensive and has potential to lay waste on an entire army. The presence of pitch and whirling dervishes requires a good number of ranged units as well.

Pack the trebuchets and relocate them a bit in front of your SW tower, unpacking them and targetting them at the Slave King's castle. Fortunately for us, the mercenary post of his lies at this site as well, so focus it and prevent any more Arabs from being created. In the meantime, slowly clear the outside of the castle (Arabian bowmen are not too numerous), while keeping clear from hidden pitch ditches! You can also trigger pitch in front of the first gatehouse, then you can move in with the full group once the fires have burnt out. Clear out the dervishes first so that they do not decimate your melee units! 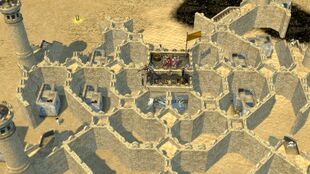 Fighting the Slave King
Add a photo to this gallery

With the Slave King removed, there is only an already suffocating enemy left. The Caliph, although his castle is set up and he sends raids, has terrible starting location and has his industries placed outside his reach. Moreover, the two Rats constantly send raids on him, demolishing his buildings over and over again. March down with everyone from your castle and approach the Caliph from the center south, the Slave King's former position. There are stone quarries with patrols coming near, so overwhelm their forces with your own and remove the infrastructure from the area. The Caliph will send a huge number of forces there to retaliate, but he will have no chance and you will even have a contain over him, as his raiding parties will go through that killing zone.

Afterwards, start the siege! The Caliph can be disposed of the same way as the Slave King, as he also relies on pitch to keep attackers away. More often than not, the Caliph's haybale launchers will set his pitch ditch on fire, along with other buildings, which makes everything easier. Once the flames are gone, you can walk up to any vulnerable section of the walls and remove defenders and buildings to your liking. The haybale launcher will continue to blaze, so remove it as soon as possible. Even then, the interior of the Caliph's castle might light up as well, so you should time your attack against the Lord. 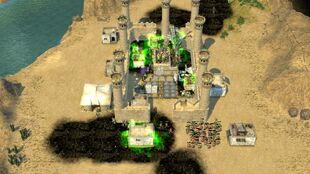 After the Caliph is gone, you can take a breather after this lengthy scenario. Congratulations for the victory!

Retrieved from "https://stronghold.fandom.com/wiki/Walkthrough:Bend_in_the_River?oldid=18573"
Community content is available under CC-BY-SA unless otherwise noted.