This is mission 1 in the Stronghold Crusader 2 skirmish trail, Desert Heat.

Once more into the fray, my Lord! This mission sets you against the Sultana, a well-known enemy. Action will be rife from the beginning, as the Sultana has an overwhelming economic advantage right on and she will test your defenses soon enough.

Speaking of which, the map plays in a weird-looking valley that includes two starting positions and two neutral estates. The Sultana starts in the middle and she has easy access to the two pocket estates, whereas you start east from the Sultana and while you have a good defensive position and neither estate has big deposits, the Sultana's estates can supply her a big load of resources. Your estate will solely include pitch and stone. The Sultana has no oasis in her mainland, though.

You start with very little gold, but a good amount of raw materials. Although your defenses should not be demanding, surviving the early pressure of the Sultana is essential. This involves getting a working economy fast.

Site the stockpile close to the marsh and oasis. Forget about the stone deposits for the first few minutes: you cannot build defenses near them and workers would be disrupted by the continuous raiding parties. Build a few apple farms to get some food and populate the western oasis with woodcutters. We want to get our bread production going northeast-east from the keep, so leave place for industry buildings.

Get up the barracks and armoury. You start with 5 bows and spears: use these to get archers and men-at-arms. Sell the iron and hop stashes to get a handful of gold to cover your funds. Build as many woodcamps as you can. Your building options are now gone and your early defenses are the most of what we can assemble. 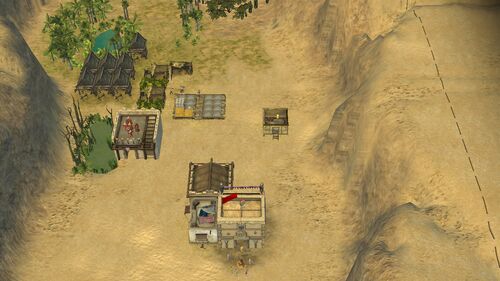 While your wood production starts kicking in, the Sultana will have made efforts to fortify her position: she got up walls and she sent troops to annex the neutral estates. She will also send her first "testing" raid to attack in the form of a few Arabian bowmen, seemingly harmless. Be fooled not though, as these archers are escorted by invisible assassins.

They can be quite dangerous for your defenses, so bring everyone to the fore and hire some conscripts as fodders. Your men-at-arms should throw their spears at the assassins, picking off one or two hopefully. Focus the assassins, then kill the Arab archers. Do not mind the casualties: you will be able to quickly get reinforcements. You can also use the Lord as temporary frontline fighter to ease your job.

Don't forget about your economy though! Build a mill, then a few bakeries to get bread production going. Try not to build hovels if you run out of peasants - reallocate manpower from the wood industry. Your food stocks will run dry and we need gold. If you are desperate, you can buy in apples to cover the folk's food requirements. When bread finally comes in, build a hovel and expand your industries further. Have all buildings function again.

The Sultana will expand to your territory, as she will attempt to ignite her food industry from your oasis. This will attract her patrols and eventually an attack, mostly groups of Arabian bowmen and Arabian swordsmen. You may decide to ignore this, but it is better to kill the units right away, as bowmen will disrupt your woodsmen. Try fending them off with what you can and have conscripts ready in the frontline. 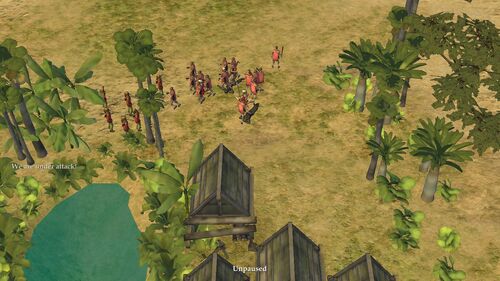 The scimitars can be kited with your nimble troops, so run around and wear them down until they die. Destroy the siege camp, or else it will spit out catapults to cause unwanted damage. Withdraw to the safety of your home once dealt with. Build your first fletcher from the gold you get from excess food. You may build a few poleturners later, however sticking with an archer-conscript composition is enough for the beginning.

In the meantime, the Sultana will have got her influence to the fullest: she will have a superfluous stream of cheese, iron and meat. If you could survive until this point, it is most gratefully thanks to your industry. The scribe will also tell you about the Sultana's raids: have your troops ready whenever the enemy strikes. Keep conscripts coming! 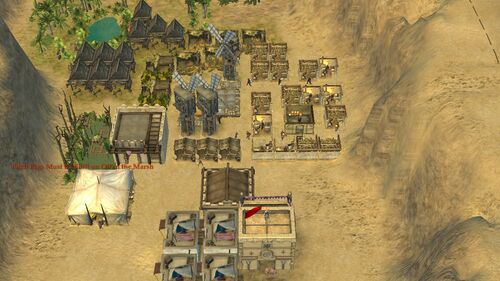 You may have noticed that the Sultana tosses small groups against you, albeit frequently. She will also build her mosque from the stone she gets. While we cannot kill her exposed granary, we can also transition to the next and final phase of the game. From continuous food sellings, we can now build a siege camp and mercenary post. Arabian swordsmen are good units that are well-affordable, so expand our army with them. Keep archers and conscripts coming as well, since they are just as invaluable in holding off raids as were before.

With mercenaries joining your ranks, you can now inpopulate your deposits, although it is not needed. Stone is quite cheaply sold compared to its manpower demands, so it may not be worth investing into. Pitch is a good addition to your coffers. With an extensive industry, you can get 500-600 food in a minute or so.

One easy way to demolish the Sultana is to use trebuchets. Although they are quite expensive, they can hit almost everything in the Sultana's domain, crippling her industry and unit production. Whenever possible, build a trebuchet and have it move to the stone deposits. Unpack it and target an area full of buildings. The effects of your aerial bombardment should halt enemy attacks, then the eastern side will completely grow barren of units and walls. You can also target the keep to remove the Arabian bowmen with the impact damage. 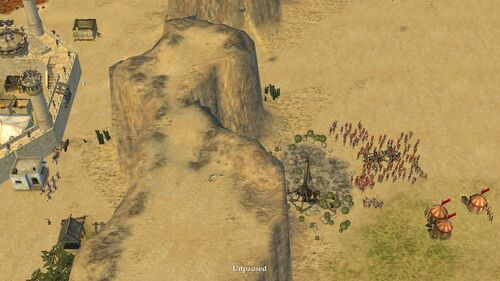 When the coast is clear, move in with your troops. Your archers will eliminate stationary bodyguards on the keep and in front of the campfire, while your mercenaries and conscripts will carve a way into the keep. 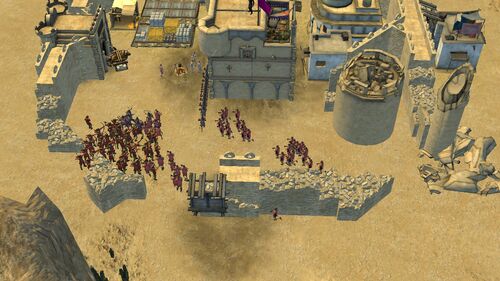 It is not long before the Sultana will eventually give up. Victory!

Retrieved from "https://stronghold.fandom.com/wiki/Walkthrough:Death_Valley?oldid=18550"
Community content is available under CC-BY-SA unless otherwise noted.