This is mission 3 in the Path of War, in Stronghold 2.

Sir William and Steele rides under Lady Seren's castle to free a young ally, Sir Edwin Blackfly. William tries to negoitiate with Seren, but the lady demands land, money, troops and rank in return. After this message arrives, William decides to siege Seren's castle along with Steele.

Lady Seren's castle is moderately fortified with two lines: an inner stone wall with multiple [[Tower and an outer, weaker wooden wall with a lighter guard.

Sir William gives you some laddermen at your disposal right in the beginning. William will head directly for the keep in the simplest route. He will send his archers to the fore, then commands his spearmen to break the wooden walls and fight the guards. You have two choices: support him or take an alternate way with your own army.

Aiding William in the frontal assault can be rewarding: you have double the firepower and it is much faster. Breaking a small chunk of the wooden walls before William's spearmen would allow them to engage the troops on the ground. Send in your laddermen and scale the walls, then quickly occupy one or two lookout towers and take the enemy archers out. Spearmen and armed peasants will attempt to attack you, but you should defeat them with your own men. Bring your men close to the campfire (out of some hostile archers' range).

A much safer way is to leave William alone. His army will be wasted, but at least he eliminated some defenders. Guide all your men to the right, then move up the hill, avoiding the marshes. Kill the few spearmen on the wooden wall and create a breach. When there is a path, move all your archers in and kill off enemy troops on the next wall. Bring your armed peasants in as a cannon-fodder. Have some laddermen set their ladders up and conquer the walls, finishing off remaining troops. A few units will attack you with no achievement at all. Work your way down via a lookout tower or a ladder (ladders can be deployed from the walls) and sneak up behind Seren's buildings.

Either way, you must end up at Seren's keep. Engage the enemy guards with your archers. They will slowly march upon you, but your spearmen and armed peasants should hold them off (defensive stance). Even the spearmen on the top of the keep will come down to meet you, but they all will be eliminated. Move some troops near Edwin and you have now conquered the keep, freeing Edwin.

The rescued Edwin is seen condemning Lady Seren, accusing her with witchcraft as she may have been seen with a black cat by him. After his outcry, Edwin promotes Steele a knight for his efforts. Then the three leave the castle. Seren watches the scene on a nearby hill and can't believe that his former husband made such a terrible thing, freeing the 'English Traitor'. 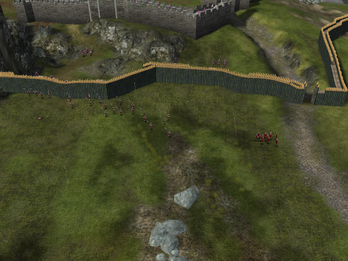 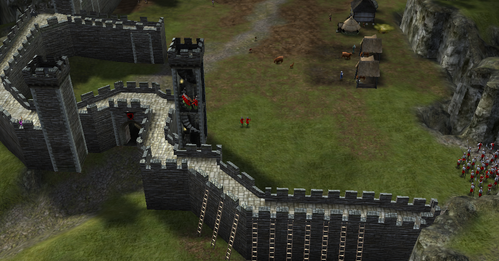 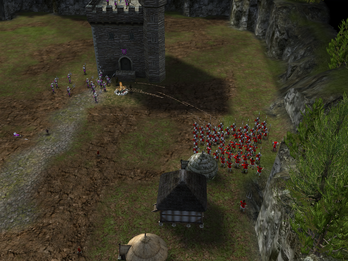 Engaging guards at the keep 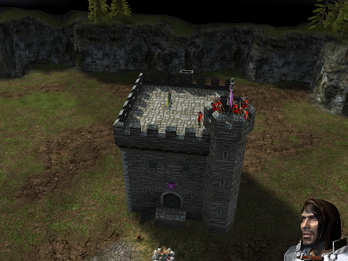 The keep is ours!
Add a photo to this gallery
Retrieved from "https://stronghold.fandom.com/wiki/Walkthrough:Edwin%27s_Rescue?oldid=8479"
Community content is available under CC-BY-SA unless otherwise noted.