Start a Wiki
This is the final mission (mission 17) in the Stronghold 3 military campaign.

Just as you breach inside your former castle in hope of killing the Wolf, you find that he is not inside. Instead, it turns out that he was waiting for you all along to come back from your campaign, so that he can pen you in the Royal Castle and sweep you away with a large invasion. The worst news is that his attack will come the next night, so you have barely any time to construct a large defense.

You have to defend the Royal Castle, the centerpiece of rule and power. The castle is reminiscent of that in the last mission, however it is not built on the hilly terrain but the flatlands. A wide area is covered by an outer wall line, while a much more confined inner line runs just inside. Stone and iron is found east to the keep. The enemy is located outside in the south behind a barricade, as well as they have some troops to ambush you in front of the front gate.

This mission starts in broad daylight. The Wolf comes to take his revenge! In fact, some of his men are already here as your Lord and his small escort team becomes under attack from his front guard. Since you command defenses, the archers on the walls will deal with them in no time.

While this fight is going on, grab all units from the keep and the inside area, and spread them out on the walls (except swordsmen). Build three or four hovels around the keep and do not bother building industry just yet, as the first night is in your back. Erect the armoury close to the stockpile along with a barracks, sell all swords and recruit as many archers and crossbowmen as peasants come in. Hold a banquet for a whopping 800 honor. The first attack will have considerable firepower and you will need all the men you can get.

Add a new engine tower to the western part of the outer wall and two other ones east from the gatehouse. Have each pair a ballista and haybale launcher mounted, to illuminate the surrounding area and to dispose of siege engines. Command your men to the western walls, because the first siege camp will be built in this place. A few archers and swordsmen will come along with catapults to test your defenses. Use the haybale launcher to discover the camp, then also send a few shots to light the path when the enemy starts their advance. Wreck the catapults with your ballista.

You earned a breather after this onslaught. You will notice that your granary stocks are plentiful: they will last the entire mission, however you might want to build a few bakeries to make use of the starting flour. Add a few wood camps, two quarries and four iron mines with their oxen, as resources allow. Build three fletcher's workshops and forge workshops each. Add a few chandler's workshops to keep popularity up. Try not to buy in wood, as you will need gold for recruitment. Station fresh macemen close to the gate and send archers to any walls visible. You can add towers to the walls as stone comes in, however remember to leave some reserve for future repairs.

Soon, two more attacks come in rapid succession, both of them now involving the southeastern front as well. Some indicators will tell the origin of the attacks; try to always have vision over the hot spots and have all archers fire when possible. For the second front, you can use the starting swordsmen to dispose of any immediate threat in case of a wall breach. The second attack will feature a trebuchet in the southwest, so be prepared to run them down with macemen after the archers and swordsmen are history.

After the invasions exhaust (of which the scribe will inform), daybreak occurs and the whole map will be visible again. It is time to take revenge on the Wolf and his army that got entrenched in the south. Two groups of ranged reinforcements will arrive from both sides for the Wolf, bolstering their ranks. 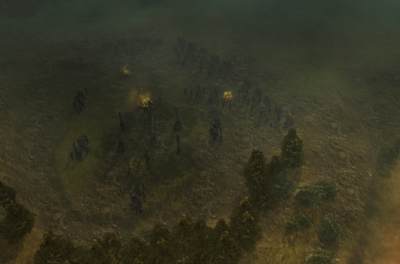 The Wolf's trench consists of a wooden pallisades, fortified with archers and men-at-arms; behind them various armored units are found in clusters, including swordsmen and knights. It seems no easy task to take the control over the banner, however given how no further attacks arrive, you have all the time you need (despite the time limit) to muster an army and overrun the trench.

Extend your industry just by a bare minimum, since your food stocks and honor are high enough to fund your units and population. You may add more fletchers and forges to hasten recruitment, however it is easy to produce extra due to the slow influx of peasants. Gold is easily acquired due to the cheap units, so do not overbuild your industries. Spare housing capacity is a nice source of popularity, as always.

When you get around 150 archers and 60 macemen (defenders included), be ready to erect a siege camp of your own and build a few mantlets. The other option you have is burning carts, however they are too fragile to participate in the attack. Bring your swordsmen and other stuff into the attack. Start with your archers and overwhelm the garrison behind the pallisades. You will incur some losses but bring up your mantlets for extra protection. 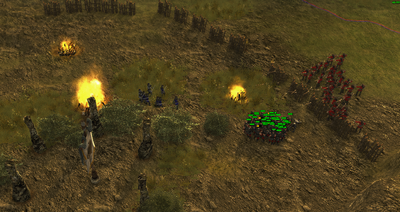 After the frontline, you will get closer to the banner, where lots of swordsmen and knights are idling. Shoot at them to make them attack you: this is the time to bring in your macemen and swordsmen and face thine enemy. The fight is fierce, however you will easily best them. When the last man is killed, you win the campaign!

Retrieved from "https://stronghold.fandom.com/wiki/Walkthrough:Final_Battle?oldid=21009"
Community content is available under CC-BY-SA unless otherwise noted.