Start a Wiki
This is mission 11 in the Stronghold 3 military campaign.

With the Rats scattered, you command Blackstaff to pursue them. In the meantime, you march towards the Jackal's territory to retake the land with your newfound army. Your troops manage to trap one of the Pigs, Earl Swinefoot, in his own castle. Now you must lay siege on it to erase yet another adversary off the board.

You start with an already assembled army on a foothill. The Pig's castle lays just ahead of you, with a dense line of walls and numerous defenders. The front of the castle is sealed away from you with a set of wooden walls, highlighting your only way of attacking. With a tight time limit over your head, you have to quickly carve a path and kill the enemy Lord.

Thie relatively short mission should be pretty straightforward, however it might take a few tries due to the constraining time limit. Your efforts rely on two things: micromanaging armed peasants and the erratic nature of the trebuchet.

Your troops already rally in front of a narrow slope in front of a tower and some walls. The enemy populated them with numerous archers, however you are given a trebuchet to soften them up. Bring forward the trebuchet in the middle, unpack it and fire at the tower. Speed up the game until the tower crumbles, then bring it back down. The tower should provide a considerable breach in the wall, while the trebuchet's rocks also deal damage to connecting wall segments. Redirect the trebuchet to another populated segment, thinning out more of the defenders. 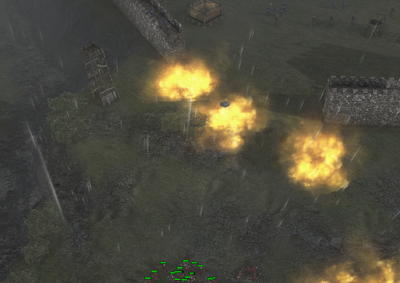 Next, do not charge with your army just yet. The catch is that the enemy poured potfuls of flammable pitch in front of the walls, ready to be ignited by flaming arrows from archers (which are plenty). Therefore, select about 10 armed peasants and move them forward. The archers will ignite pitch ditches the moment your troops get close to them, so be ready to direct them to a different area when you see flames coming alight. The peasants will mostly die, however they are really helpful to clear the path. Try to remove a straight line of pitch so as to clear a wide area. You will need two sets of peasants to clean up pitch.

The moment the flames die down, move in with all your troops up to the hole. The archers will slowly take casualties, however you should be able to clear the immediate threat from close by. Some stationary guards will also charge, however they are not enough for your superiority. 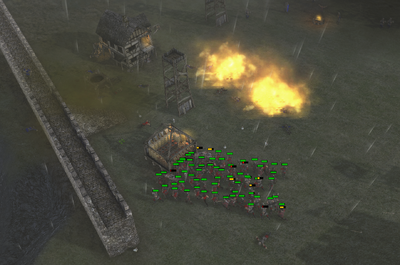 In the courtyard, just ahead, lies your objective the enemy Lord. He is however surrounded by another thick layer of pitch ditches, which need to be removed. Use the rest of your armed peasants to maneuvre around and trigger the ditches, however pull them back this time to the main army. An oil smelter is also located near the breach: kill the engineers that come for fresh supply. 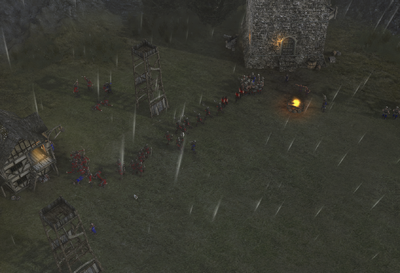 When the final pitch ditches are mostly cleared out, charge in with your troops. You do not need to capture the keep, only kill the Lord at the campfire. If you move to the northwestern part inside, your archers should be easily firing away until the enemy is dead. Well-deserved victory!

Retrieved from "https://stronghold.fandom.com/wiki/Walkthrough:Glimmer_of_Hope?oldid=20966"
Community content is available under CC-BY-SA unless otherwise noted.