Start a Wiki
This is mission 14 in the Stronghold 3 military campaign.

With Lady Catherine rescued, you manage to secure her and her right to the throne. Sir Longarm tells you about a fort in the middle of the lands that can be used to shelter Catherine and yourself, which is poised to come under attack soon by the vengeful Jackal and his company. You must hold out in an attempt to exhaust the enemy forces.

Longarm's castle is a magnificent stronghold with two passageways to enter from. Both ways have their own defense lines, as well as an inner long wall provides a steady fallback position. The very interior has a little residential area, with marshes in the center and iron just north. The western pathway is narrower, but features multiple wall lines.

The first true testament of your skills and strategem. The adversaries will relentlessly pour units at your position, initially from the south, then from the west as well. Waves of enemies will come in huge quantities, trebuchets will pound your walls and you will need to constantly replenish your fallen soldiers. Thankfully, random events are not a hindrance during this mission.

The castle more or less highlights the places you should erect each buildling at. The interior will go for banquet buildings and housing, the center courtyard will serve as a production hub (place your armoury nearby), and you will build food production around the granary. You start with a healthy stock of goods and units to establish your setting out.

Like before, aim for a healthy income. Covering popularity is best done with the already existing church and ample candle stocks, which can be supplied well with only a handful of chandlers. Interestingly, food variety is a reliable addendum to your net balance, while overproducing pigs is also a nice source of money. A pre-placed jester's court will provide 20% health boost, 10 popularity and -10% worker efficiency, which is pretty useful for boosting your troop power. Pitch also sells well (better than iron!), so make sure you build enough of them in the long run.

Getting peasants is tricky in this mission. Although you will not need to manage popularity much, the first few minutes will pass with peasants taking their workplaces. Try to balance out recruitment and always have a healthy reserve of peasants by building excess houses. 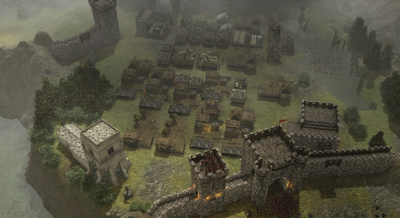 Enemy attacks are constant throughout this scenario. What is more, two enemies will attack you at the same time! The blue enemy (the Jackal) is much more threatening though in the south, with his far bigger armies and trebuchet attacks. Not long after the beginning, a green adversary (Swinefoot) will also turn up, however his attempts are easily repelled, as his forces are way smaller.

Expect all kinds of troops knocking on your door. Archers and swordsmen will pour from the Jackal's position, with the occasional man-at-arms and pikeman. Catapults will try to bombard your front walls from up close, while sporadic trebuchets will deploy out of reach and hail rocks at various positions (mostly the right-side walls). Towards the end, some crossbowmen will also try to snipe your units from afar.

Defense against the Jackal is not easy. First and foremost: you cannot replace stone structures (except the barracks and armoury). You can buy in stone to repair them however, and you will need lots of it to keep them topped up due to the out-of-range artillery bombardment. Second: the southern defenses cannot be reinforced on the walls due to the absence of stairs, only repositioned. It is imperative that you keep the wall line in one piece and move your troops out of danger when the trebuchet arrives. Buy in stone and keep the walls repaired!

The mission hints that pitch traps will help you, however they are rather unreliable and cannot be utilized fully due to the vulnerability of your outside defenders. Stake traps and other curiosities are powerful, but you will need iron for your production and man traps cost an immense amount of it. It is best to amass a sizable army outside your gate and make use of the slight height advantage. Make use of archers (to counter the enemy ranged forces) and swordsmen (to protect your archers and stall enemy armor). Have all existing archers on the southern front stationed in the western tower, where they can fire most effectively from.

Sometimes the trebuchet fires diseased pigs and cows at your walls, spreading clouds of plague to remove your units. Move your units out of its influence as soon as you hear loud squeals or moos. If it knocks down a wall (due to enemy swordsmen being nearby, thus denying repairs), rally all melee units close to the hole, while still minding carcasses. 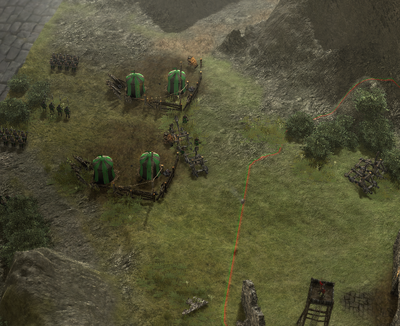 Swinefoot is the one who attacks from the western valley. He is a more passive enemy, who comes rather unprepared into the fight in the ranged department. His reliance on sheer brute force is often his undoing, fielding macemen and men-at-arms, along with a few catapults.

A large number of archers (40-50) stationed on the large gatehouse will stop any charge he will conduct, as well as prematurely pick off catapults advancing on the slope. Regularly check the walls and repair existing damage, if any. 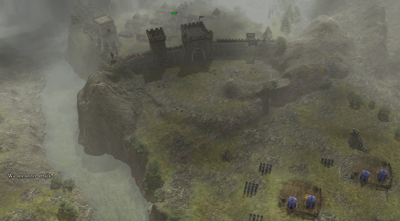 How to win this missionEdit

Generally, it boils down to finding the balance between recruitment, trade and troop placement. Repairing walls, recruiting units and selling stuff for gold takes lots of involvement, however it pays off. Always extend your production when there is a breather between enemy attacks, also do not neglect any shortcomings (particularly skyrocketing food consumption or badly reinforced areas). Sturdier troops should always fight in the frontline and do not conduct raids outside the castle, where the enemy's superior numbers may await you. Keep banquets going to have honor for swordsmen.

Lots of availabilities are not worth using in this mission:

This mission is one piece of big attrition. You face one of the main adversaries after all! With patience, the struggle comes to an end.

Retrieved from "https://stronghold.fandom.com/wiki/Walkthrough:Longarm%27s_Stronghold?oldid=20983"
Community content is available under CC-BY-SA unless otherwise noted.