Start a Wiki
This is mission 3 in the Stronghold Crusader 2 skirmish trail, Desert Heat.

Paradise Island is a tight and unbalanced map with lots of uneven land, twisted pathways and unwanting enemies. Resources are scarce, enemies are right on your doorstep and even the numeric advantage is on your enemies' side, seemingly putting you in a hopeless position. The two Shahs and the yellow Rat takes over the northern half, while the green and teal rodents settled in the south. Prepare for a big swarm of hostiles.

This map is an island (as the title implies) with lots of small patches of land, connected with narrow ledges, interlocking small lakes. Distance between estates is very small, yielding at most one key resource to all of them. On the northwest and the south, there is iron, while stone deposits are found in the east and the southeast. Wood and oasis is available for everyone.

The initial situation is messy, however you are given a great reserve of starting stocks and also got a 5-minute peace timer, which lets you establish your starting economy and defensive structures. The enemy will not attack you until the timer has run out. Be wary however, because after the timer hits zero, you will be swarmed by raiding parties from ALL enemies and if your defenses are not in place, you will be overwhelmed. Fortunately, the position is defensible and a large area in the center will allow you to claim the oasis for yourself.

Make liberal use of the "Pause" button during the first few minutes of the game. This will allow you to plan each step, as well as build every building in a comfortable pace, and trade. While trading, you can order a big bulk of resources, which transfer to the stockpile after unpausing, so that you needn't squander time changing between trading and building.

Erect the stockpile and granary east to your keep. Since the oasis is vulnerable and too small, you will need to rely on bread production. The forest to the northwest is also in firing range of hostiles, so erect the wood camps just to the north. Leave places for hovels as well! Three of them are needed for setting out. Buy in a big bulk of wood and place as many bakeries as you are comfortable with. You need one mill for two wheat farms and four bakeries. 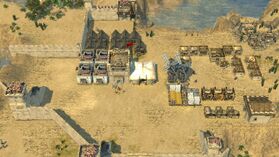 An example of starting industry
Add a photo to this gallery

This is a crucial step, which solidifies your position in the game, if executed right. The problem is that the enemies can get in numerous paths and you cannot afford to leave yourself unsurrounded, due to the vast number of enemy soldiers coming at you all at once. You have lots of stone and gold, use these to erect a line of impenetrable defenses!

It is quickly realized that the bulk of enemies will come in from the west, southwest and south. Also, you need to erect a small defensive line in the north, to contain the yellow Rat's raids. These defense lines should consist of the following:

A working layout you can use with minimal stone from the market is done as follows:

To the north, build the barracks and a small tower. Leave a gatehouse for woodcutter access, and place the tower in a corner to catch stray units harassing your workers. Most units will attempt to attack your barracks, getting caught in the killing volley of your ranged units.

To the south, place two medium towers with a thin wall line forming a corner in an inward L-shape. Extend this line to the right by adding a gatehouse, another small tower for the easternmost point, filling in holes with walls. Use only thin walling whenever possible, as well as a curtain gatehouse suffices (since not much damage should be done by anything, really).

As to which units to use for sustained defense, it makes the most sense to use a combination of Arabian bowmen and crossbowmen: the former has great rate of fire, range and damage against unarmored units, whilst the latter one-shots light units and deals respectable damage to armor. Speaking of which, the Rats will send conscripts, men-at-arms and the occasional archer, while the Shahs like to bully with groups of Arabian bowmen and Arabian swordsmen. These units will also fight during siege camp attacks, so you will need to constantly observe and reinforce your towers. The southwestern position will take the brunt of the pressure.

After the five minute peace time, the enemies will become restless and send a FULL group of units (15-20) each. If crossbowmen are going to be recruited, you will need to create artillator's workshops and armourer's workshops quickly, right in the beginning of the game! You get no weapons as well, so build a mercenary post and recruit Arab bowmen, as funds allow. You cannot go overboard ever with Arab bowmen, since 5 minutes will quickly pass and all your towers will require a sufficient number of troops.

As the attacks come and go, you will get stronger by the minute, deflecting the endless swarm of hostiles. If your wall lines are constructed well, your units should be able to pick off any stray unit that goes on to work on your walls. Enemy catapults should not be a problem, since they will have to come into range in order to bombard your fortifications. Try to have your quarries up and stockpile some stone. Repair any damage. Build bakeries and continuously recruit units. 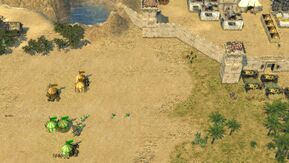 Continuous attacks from multiple enemies
Add a photo to this gallery

When you feel you have enough defenders, try to build up your attack force. The yellow Rat on the north is the closest enemy you could do (and perhaps the only one due to high pressure), so go ahead and make some Arabian swordsmen. You can afford them by extending your economy. Candles are excellent to raise tax, since churches only need stone and gold, as well as sell excess bread. If you need more crossbowmen, buy in iron for your armourers.

For the first attack, bring your melee troops to the fore, and slowly push forward with support from your ranged defenders! Since the Rat has nothing significant to offer in terms of resistance, you will have an easy time picking off his forces, while sustaining minimal casualties. Due to the unit limit, you will need to care to not overmake Arabian bowmen. Only the gatehouse should pose enough challenge before the Rat falls.

Then, you can proceed on the remaining enemies as you want. A force of 50 Arabian swordsmen and 30 crossbowmen can steadily march down and dispose of any resistance. Use the durability of your forces and strike with impunity, as the hostiles will never be able to muster an adequate response force. Make a way open in the form of destroying gatehouses and head for the lord itself, while your crossbowmen work on removing any troop from range. Bring in the defenders from the defense lines to gather even more power for your strikes.

One by one, your enemies should fall before you. On to the next mission!

Retrieved from "https://stronghold.fandom.com/wiki/Walkthrough:Paradise_Island?oldid=18588"
Community content is available under CC-BY-SA unless otherwise noted.