This is mission 4 in the Stronghold Crusader 2 skirmish trail, Breath of the Infidel.

The last mission in this trail. While menacing at first, the map is actually reasonably balanced. You fight against the Caliph and his two rodent underlings, in an economic disadvantage. The enemy's starting stocks will make them attack fairly early and with great numbers, so you have to construct defenses fast.

The map itself is divided into four sections resembling a shamrock. As such, the map is symmetrical and each other's estates can only be approached through the central pit. All estates are on the same ground and have stone and iron, respectively. Building is possible to almost as far as the center.

You get ample resources and just enough time to construct defenses. Fortunately, your position is very defensible and little fortifications will be needed to prevail. You need to sustain the constant harassments through repairs and reinforcements.

Start off by building the stockpile close to the iron patch. This way, your surplus iron will quickly build up and you can get more gold out of it. Continue on with the granary and start building the bread production facilities as usual. Sell the pitch, ale and hops and site the barracks, armoury and a handful of forge workshops. 12 woodcutters will also be needed for the first bunch of wood delivery. Have level 2 taxes since you have plenty of food in the granary.

For the initial defense, it is imperative that you wall off your settlement. This is needed because conscripts and slaves will swarm the area and your starting troops will not be able to handle these run-bys. Macemen are good, but the AI will ignore them and head for your buildings. It is enough if you leave a medium tower in the middle corner, then have it join with two curtain wall lines connecting to the natural boundary. 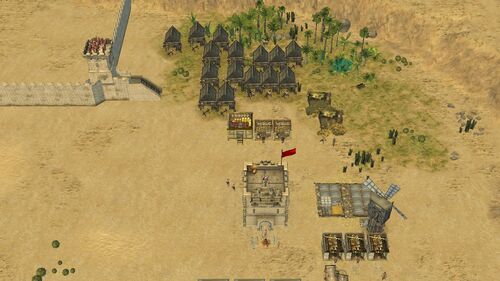 As you are waiting for the first wood batches to come, all three of your enemies will attack at the same time. The Rats will erect a camp on their own fields, while the Caliph will join the northwest attack force. Your defenders will deflect the Rats with ease, however the Caliph brings a nasty fire ballista on the field, sniping your units. Try to take it out with utmost priority. 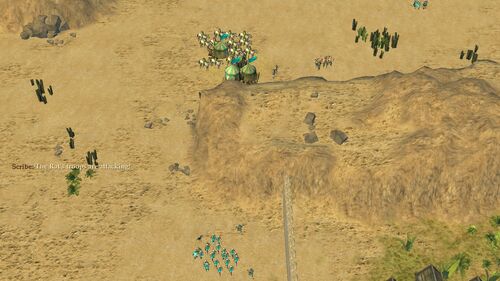 From the wood, erect more workshops and mines. You might need to balance between stone and iron mining, as you need more than one tower and eventually gatehouses to send out rapid response forces (more precisely, macemen). Since we forewent the mercenary post, we need some archers or crossbowmen to strengthen the walls.

The rodents will keep sending dozens of conscripts. Since they have no valid target other than your walls, they will attempt to tear down your walls. This is where your macemen will come in handy: whenever your walls are under attack, send them out immediately. It is best to wait until most of them regained their charge ability, but it is not necessary. The first few waves will be deflected with ease, though later you might consider adding healers to have the macemen restored their health.

Get more towers and try to keep the defense line symmetric. You want to get as much control over the area as possible and thus construct the towers so that your ranged units can fire at the demolishers.

From the resources you get and the double taxes (make sure to restore them to default once bread is only in the granary), you should get a good income. At your fullest, 4 iron mines and 3 quarries should provide minerals, while the rest of the wood goes towards workshops and bakeries. You might also construct the mercenary post and pump out units according to your demands.

The attacks will intensify in the meantime, with the Caliph joining the frey: initially he sends slaves with slave drivers, then he will add another threat in the form of horse archers. Both Rats will also add men-at-arms, throwing deadly volleys of spears at your troops. While the enemy is throwing an enormous amount of resources in the non-stopping aggression, they will eventually whittle down your numbers. Have healers near, reinforce your units and keep all macemen inside the gates. Repair any damage.

Although you may suffer dreadful casualties, your position has now stabilized. Your macemen should not be needed anymore, left on standby duties and forming the soon-to-be attack force. With your excess gold and weapons, you can now shift to sturdier units. As you went for maces, the obvious answer can be templar knights, but you can add the cheaper swordsmen or Arabian swordsmen in the mix. Add workshops accordingly. Sell bread, excess iron and stone (leave some for the workshops and repair duties).

Build your attack force as stated above. When you have about 60 macemen and about 30 armored troops, move out for the teal Rat. This guy shows the most persistent harassment attitude, and he has more gold than his green counterpart. Be steady with your march and kill any units that interfere. Siege camp attacks might come, but their forces should be crushed as well.

When sieging the Rat, you might be familiar with his castle designs already. Demolish the armoury and the gatehouse so you will have easy access inside. As usual, the Rat might freak out and come down to hasten his depart from this earth. 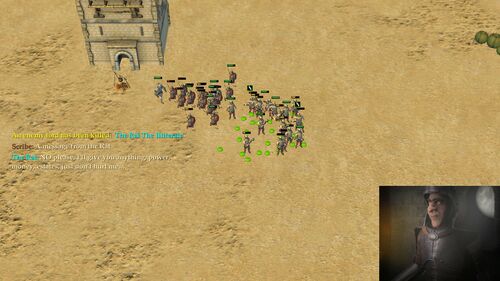 When he is dealt with, return home and have your troops healed. The green Rat should be approached and attacked the same way as the first Rat. Your woodcutters going after wood will provide a constant distraction to his units (one reason for not putting them on halt). This Rat's castle design is a bit different: you have to cut through one layer more to get to him. 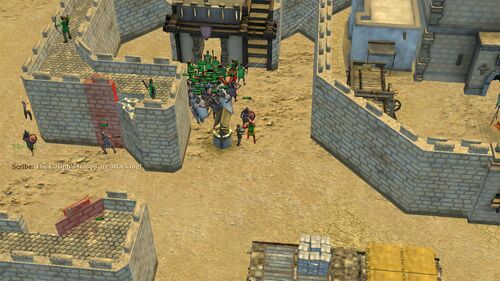 The Caliph is a particularly nasty opponent to siege: he has lots of pitch ditches, oil pot throwers and haybale launchers at his disposal. No matter how durable units you might send in, they will surely be killed in the flames. That is why you need all units from home to assist in the upcoming fight.

Bring your tower garrison, ignoring the Caliph's harassment / attack attempts. Notice how dense he is building and how the mercenary post is lying outside exposed. Run it down with your macemen, kill any units around, then pull them back. The haybale launchers are very destructive to your troops.

Bring forth the ranged units and have them rain fire at the sparsely positioned Arabian bowmen. The fire throwers will also absorb some fire, but your crossbowmen should take them out fast. Sweep and clear the towers from closest to farthest gradually. Enemy patrols will also try to defend and get your troop in a crossfire. Eliminate the haybales from a distance so that they do not light up the pitch around the castle walls. 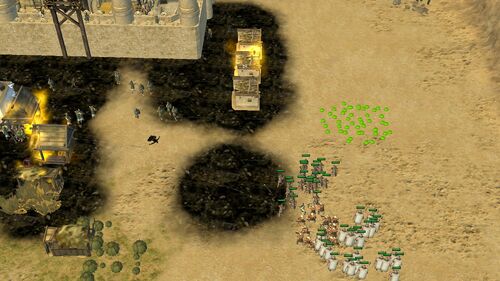 When most of the defenders are disposed of, take out every pot thrower on the keep and then charge in with your troops. The Caliph might come out if he sees a weak point in your position, but he will be forced to face all your might and tremble before you.

Congratulations! You won the Breath of the Infidel campaign!

Retrieved from "https://stronghold.fandom.com/wiki/Walkthrough:Pit_of_Despair?oldid=17698"
Community content is available under CC-BY-SA unless otherwise noted.