Start a Wiki
This is mission 2 in the Stronghold Crusader 2 skirmish trail, Baptism.

As the name suggests, this mission brings another 1v1 fight: this time against the Rat. The rodent has a considerable gold advantage, meaning he will fiercely send as many units as possible in the first few minutes of the game to steamroll you.

The map is very imbalanced, consisting of a barren plateau and a fairly prosperous western estate. The latter place has lots of oasis and a stone deposit, while the eastern estate's only advantage is the highground and a securable wood patch. The Rat inhabits this desolate eastern side, which means you have a formidable strategic advantage over him. You can play this mission defensively until the Rat runs out of funds, or take the initiative right away.

Immediately take advantage of your location and start building a defensive perimeter near the Rat's only access point. Build a great tower as close to the cliffs as possible, and a medium tower to the lower end of the passageway. Lay down the barracks and mercenary post and recruit as many archers as possible from the starting weapons. Recruit 4 crossbowmen and a sergeant-at-arms, then sell the excess goods you don't need: iron, pitch, hops, ale, spears.

The Rat will send lots of small squads of men-at-arms and conscripts. These units will swarm down the steep and make a beeline to your area, threatening everything around. The core strategy is to build up enough forces to contain the constant offense, until you can build up an offensive vanguard to slowly push back your way to victory. Fill the northern tower with archers, crossbowmen and Arabian bowmen, and station the sergeant here for the defensive buffs. Get a healer as well in case a few archers might chip your units from outside range. The southern tower is for clearing up the stragglers that survived your initial barrage on the top. Get a few units here as well. 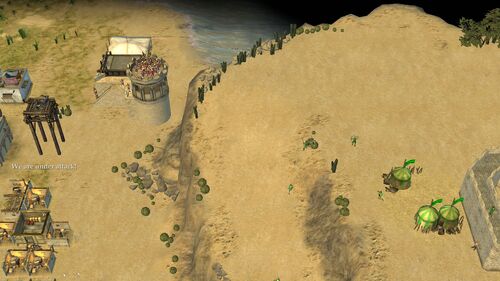 With the area under control, you should now build the economy. Your income can come from selling a lot of raw materials or taxes. It is simpler to sell off and overproduce goods, as you have lots of arable land and stone at your disposal. The Rat has no options whatsoever, as your defense line effectively denies access to map features.

Build woodcutters, stone quarries and bread production. You can buy in the wood for faster building. You can sell off the stone and bread, getting raw gold to recruit and hire additional troops. Keep adding bowmen to your defenses until you feel comfortable enough with it. From the incoming wood, extend your production capabilities to accelerate recruitment. You can fit as many as 6 quarries to the deposit. 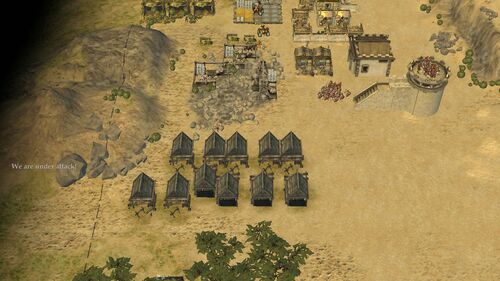 Build a good force of 25-30 Arabian swordsmen. You can add some cannon fodder units and other ranged units as well, but they are unlikely to survive against the massive numbers of men-at-arms and archers, who have range advantage and powerful projectiles. Arab swordsmen however, have superior armour and able to butcher their way through the swarm. Keep selling your goods to quickly amass this force.

When you feel it is ready to strike, venture out and bulldoze your way through the cheap units the Rat tosses against you. The units will just keep coming, so you might want to carve a way in and destroy the barracks. A sizeable amount of footmen will wait you in the entrance, but just keep demolishing those walls. After the barracks is history, send your men in to break in the inner ring of the castle, where the Rat is waiting to meet his destiny. 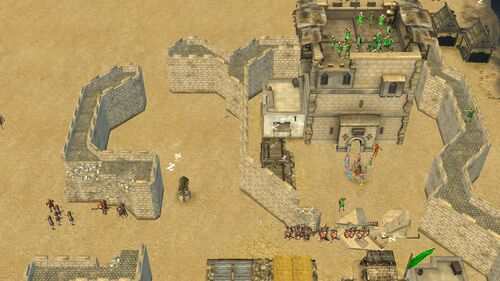 The bodyguards and the lord will fiercely fight for their lives, but they are no match against your elite troops. Victory!

Retrieved from "https://stronghold.fandom.com/wiki/Walkthrough:Rat_in_a_Cage?oldid=19515"
Community content is available under CC-BY-SA unless otherwise noted.