This is mission 3 in the Stronghold 3 Blackstaff campaign.

Silverback's attacks did not work out, as Blackstaff held firm and gains the support of the local villagers. He retreated to his castle, where Blackstaff sniffs out a chink in his armour. Although the encampment is heavily fortified, Silverback's castle is laid siege to. You must lead the attack to victory.

This map features Silverback's large castle that is located in a valley. A ridge borders and overlooks the castle in the western side that extends to the north. The castle is fortified with numerous troops, with the keep located at the foot of the northern hills. The main (and only) entrance is approachable through a narrow passageway.

You start with a rather unremarkably looking army with lots of low-ranking soldiers in the bottom left. You get some armed peasants and men-at-arms as a backbone, along with some archers and a few swordsmen. You also have two catapults to break through structures.

There are two pathways connecting your start point: a long narrow trail that leads to a clifftop, and another trail leading to the main gate. Silverback himself made a design flaw, as his castle is well within archer range from the first path. As a band-aid to his problem, he erected a barricade and 'fortified' it with armed peasants. Move your archers up to the wooden barricade and fire away. Kill the wardogs in their cage, then the helpless peasants behind the wall. Knock a hole with your catapults, then bring up your armed peasants. 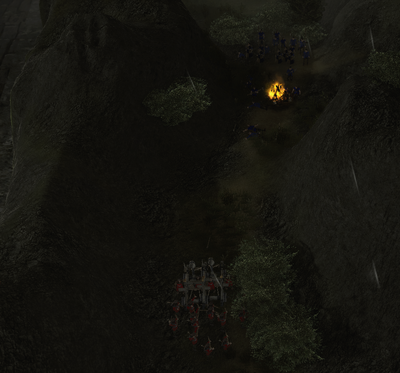 The ridge has various horns, from which the enemy can be sniped on the ground and the walls. Group your archers with the minutemen and methodically eliminate every batch of units within range. You can kill some sentry men-at-arms behind the front gate, archers on the first wall, macemen in an inaccessible courtyard, another group of archers on the last wall (match them with your superior numbers), and finally the majority of the troops around the keep (particularly those nasty crossbowmen on the roof). Your shots will attract the wounded troops, who will head out and slowly march to meet you. Greet them in kind with your foot units. 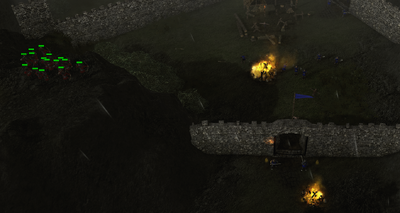 When the above defenders are eliminated, you can now start breaching Silverback's walls. Move forward with your catapults and destroy another wardog cage. Use your archers to draw swordsmen guarding the gate, then destroy the front wall.

The enemy keep is reachable through a series of gates, however enemy opposition is also the most concentrated along this path, particularly a great tower with archers can overlook anything. There is an alternate way however: you can slowly sneak up hugging the base of the ridge, which you cleared with your archers. Do not send all units at once, or else your formation becomes wide enough for those tower archers to reach. Kill every stray unit in range and inch forward with your catapults. 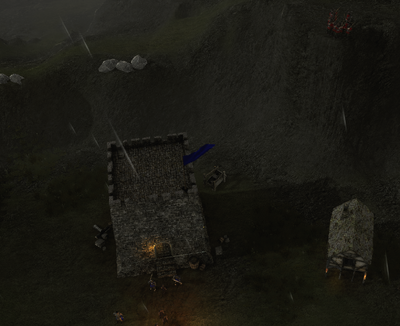 When you reach the courtyard with the bakeries, get ready to breach the final walls. The campfire is guarded by a few swordsmen, macemen and the Lord. Quickly dispatch them (the Lord will just stay in place), then move up to the keep. After a short while, the scribe will announce the capture of Silverback, and you win the mission!

Retrieved from "https://stronghold.fandom.com/wiki/Walkthrough:Silverback%27s_Castle?oldid=21095"
Community content is available under CC-BY-SA unless otherwise noted.