Start a Wiki
This is mission 13 in the Stronghold 3 military campaign.

After you broke through the siege of Lady Catherine's abbey, you go forward to rescue her and lay siege to Redham's castle. Redham is a pretentious thug, who needs to be put out of commission. This time however, it is imperative that Lady Catherine survives, preserving a seed for a future legitimate government.

Redham's castle is (no surprise) on a hilltop, consisting of a large outer line and a weak curtain wall line inside. The area it covers is rather large, of which you start in the center. The area is covered in darkness, however the enemy has beacon towers spread out in the front, ready to ignite them at the slightest provocation. You need to find a suitable area to penetrate through and liberate the enemy keep, for which you have limited time.

This mission is the same in length as the previous mission, however with another added element to the challenge: darkness. This time, the enemy visibility is the same as yours, however they can ignite beacon towers to illuminate the surroundings, uncovering your disguise.

There are two possible areas to attack: the area west to the gatehouse, or the far eastern side. The latter is more favourable due to the wider surface, as well as you can approach the walls very close within cover. There is a huge plateau you can assemble your troops at, so bring them in a straight line. Be careful not to expose any of your troops to the defenses.

Once there, look over the defenses and see how they are constructed: a small bastion tower fields numerous archers, the walls also have a few number of troops, while a beacon tower is located just close to the bottom of the slope. Flare towers are automatically set alight when a unit gets near, so you need to create a distraction, while a second wave of units disposes of the tower. The moment the tower collapses, enemy visibility is reduced to about nostril length, giving free reign for your archers, who can dispose of them with impunity.

Gather half of your armed peasants and all sappers, then send them to the exposed wall line with the bastion. The enemy will light up the beacon and even a few pitch ditches, however your units should take care of the tower and start picking off the walls. Also remove the beacon tower to regain some cover, then bring up your archers and loose all hell on the defenders. If some stragglers fight back, just move out of range or terminate them. 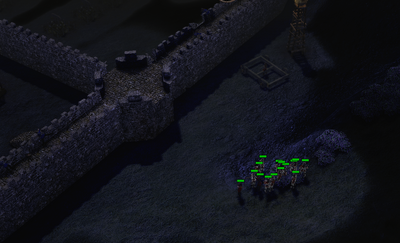 If everything went well, the walls should mostly lay barren. Usually a few archers are left on the northernmost part, eradicate them with macemen. They will also draw fire from crossbowmen on some illuminated slope, who will move up to your units once they get out of range. Wait for them, then ambush them as they pass through the narrow gate.

Knock a hole in the wall, then send up any units through the path to the keep. Well-deserved victory!

Retrieved from "https://stronghold.fandom.com/wiki/Walkthrough:The_Bishop_Redham?oldid=20978"
Community content is available under CC-BY-SA unless otherwise noted.