This is the third part of mission 8 in the Path of War, in Stronghold 2.

As soon as you get to the game, order ALL troops to return to the castle. Get as many swordsmen around the lords (Matthew Steele and Sir William) as possible as well as a few knights. Keep your mounted knights outside and get as many more out as possible and get them mounted on a horse. Spearmen should be placed along the walls and around the campfire. Place macemen and pikemen both around the campfire, around the lords and outside to tackle siege equipment. If you wish, you could also train some mercenary troops to give you more men to fight the invasion with. Build a few towers and put ballistae/mangonels on them. IMPORTANT: when magonels are placed, they must be COMMANDED to attack. They won't attack automatically. Finally, get as many archers as you can into the towers and onto the walls.

Very soon, The Hawk's forces will arrive but you will notice something when they set up. They are sending out siege equipment but aren't attacking. Send in some knights to beat the siege equipment and try to take out some archers as well. If you have chance, send in some more troops and destroy The Hawk's army entirely. However, soon you will find out the reason why the army didn't attack. The Bull arrives with an army to aid The Hawk. Pull all troops back. Again, take some more mounted knights and destroy the siege equipment before it can attack. Kill as many archers and crossbowmen with them as you can. Again, send in the rest of the outside troops to attack The Bull's army. Remember, go in this order for destruction: siege equipment, archers/crossbowmen, laddermen and then the rest of the army.

If you succeed in smashing up these armies, get all your remaining troops together and keep them at the castle. Train some fresh troops and build your own siege camp where the enemy one was. Send out some ballistae and assault the enemy ballista and mangonel in each of the two towers. Use your ballistae to pick off any remaining troops on the walls. Next, build a catapult or send in some laddermen to get past the wall. Then use archers, crossbomen and ballistae to kill enemy troops that are in the way. Finally, charge in with the knights, spearmen, pikemen and swordsmen you have left and kill The Hawk.

Here are the men you should take to attack: 10 swordsmen, 5-10 knights, 20 archers, 20 crossbowmen, 30 spearmen, 20 pikemen and any mercenary troops you have. Build 4-6 ballistae and 2-3 catapults in the siege camp.

After this, a cutscene is shown where Barclay thanks Matthew and William for removing another 'obstacle' between him and the throne. Just then, as they are about to be killed by Barclay's men, someone shouts 'LOOK! TO THE SOUTH!' And there is Sir Grey with some aid. He shouts 'Matthew, William, good evening! The King says you look like you could do with some help!' Before the poor old man can say or do anything more, Barclay shouts 'SILENCE YOU PRATING OLD FOOL!' and shoots him in the chest with his crossbow. After that, Barclay flees and Matthew, William and The King must catch up with him in the next chapter at his castle. 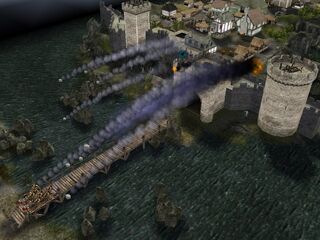 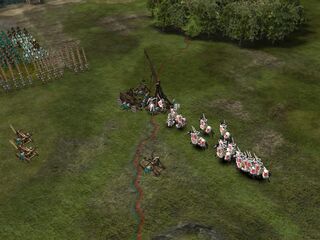 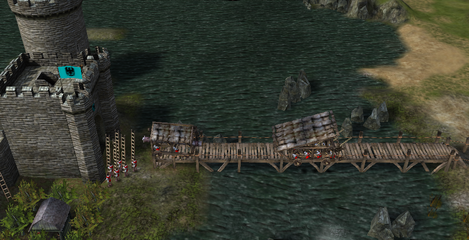 The fight to death
Add a photo to this gallery
Retrieved from "https://stronghold.fandom.com/wiki/Walkthrough:The_Hawk%27s_Nest,_Mission_3?oldid=9473"
Community content is available under CC-BY-SA unless otherwise noted.