This is mission 2 in the Stronghold Crusader 2 skirmish trail, Breath of the Infidel.

This skirmish is a yet harder mission than what you had to face in the previous one. It looks balanced at first, as your team and the enemy opposition has the same number: you get the Shah against the pressure of the well-known Rat and your former ally, the Sultana. However, the enemies get three times your starting gold and much bigger starting stocks.

The map builds how the mission is called like "iron hills": there are plenty of hills with vast iron deposits. Not every estate is blessed with iron though: these patches are scattered on the boundaries of estates, making mining very risky but rewarding, as they cover a lot of ground. In the south, there is also a big stone site. The map is very uneven though: the Sultana's team has highground and easier access to the big mining sites, as well as she has a pocket estate carrying additional stone to her reserves.

A new addition to this trail is neutral hostile buildings: numerous lion dens lie around the big ore fields and a few Beduin outposts in the center of the map. The outpost and the den is clearly a relief in your struggle, as the hostile entities will wreak havoc on the Sultana's mining as much as possible, but they might disrupt your own mining as well.

You start with a small oasis field in the northwest and between two very big iron areas. You might find to exploit the southern deposits, but they are very much in the open and close to the Sultana's interest points. You should build the stockpile just a bit northeast from the keep, near the border (the building will turn red if building outside). Leave place for some small towers, because you will need to gain as much range as possible. With a watch tower, you can snipe neutral Arab swordsmen from your position.

Site the granary in the area. You will need a handful of apple farms to provide adequate food quantities until bread production kicks in. Spread numerous woodcutters in the forest to get your industry going: 12-14 huts will be needed for this. Get the starting archers in the lookout tower, while the men-at-arms wait on the keep. Build the mercenary post and recruit additional Arabian bowmen and swordsmen for the lord's defense. 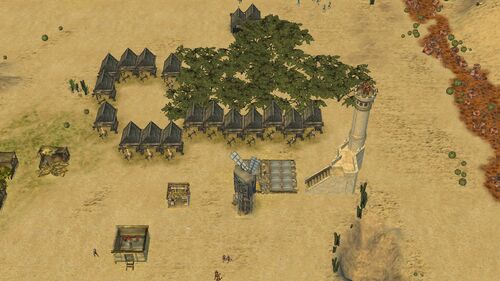 The Sultana will have easily annexed her rightmost estate, which is yet to kick in. Ignore this act as you cannot do anything about it right now. Build wheat farms, a mill and some bakery buildings. You might need to buy in apples to prevent starvation. The forest will start to disappear in the meantime, but we need the vast wood from it. Keep them sawing!

You should get the messages from the scribe that your enemies attack. Thankfully, the Rat's efforts are wasted on you, as the lions and Beduins should thin them out. 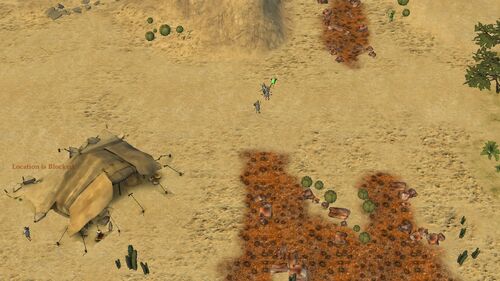 The Sultana's units are however avoiding the lions and will launch an attack on you. Not only she will come with Arabian swordsmen of her own, she will also start pouring assassins on your defenseless position. That is why some units are stationed on the keep: the enemy will meet relentless ranged fire while catapults have a hard time taking anything down. To fight the swordsmen, you need to toss everything against them. Move injured units away from the action to change enemy targets and move them back.

You should defeat these attackers with ease. After the attack is dealt with, bread should now come in abundance. Remove your apple farms and build more bakeries.

Getting the war machine goingEdit

In the meantime, the attacks are relentlessly coming, but your small defenses should hold them out. Interestingly, the Shah proves to be a powerful and reliable ally: not only will he send out units to attack and distract any enemy, but he will also provide you the stone you might need for towers! His mood is always at 100% and his Arabian bowmen also defend your outlying buildings. You can start populating the iron deposits you were eyeing at, as well as ask for a stone batch or two. Since towers are expensive, you might expect this gift for watching the Shah's back. 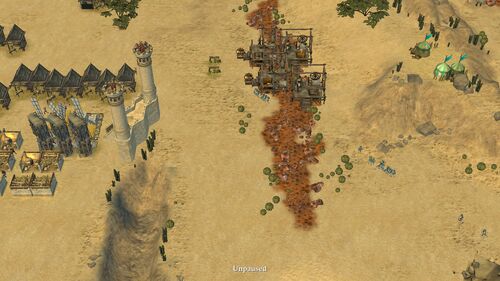 Prepare for extending your industry: you should have lots of wood and iron in the stockpile, as well as the forest you were cutting down must now entirely have disappeared. Relocate your wood camps to the west to get some wood coming in! Also, now that you have access to iron, you can start building barracks units. Any combination is possible, but swordsmen are very good at running down enemy opposition and come considerably cheap. Build workshops and mines accordingly.

Both enemies have been pouring lots of harassment in your way and they just don't seem stopping. The Rat's small conscript raids are barely a problem, if you defend your iron mines, but the Sultana is much harder to dispose of: Arabian bowmen and big packs of assassins can wreck your outside defenses. You will need to lure the assassins to a garrison of swordsmen to eliminate them.

Slowly build your army of armoured troops: Arabian swordsmen and swordsmen. You can also add templar knights or macemen in the mix. When you have your army ready, march out and steamroll the Rat first. He is doable with 30 swordsmen and 25 Arabian swordsmen. Knock him out with the well-known strategy: destroy the outer gatehouse, then move in to breach the inner ring. Once the path is clear, eliminate the Lord. Once he is done for, head back to your domain and heal your units. Since healers work very slowly, it might take some time to get everyone up and running again.

When you have your army in good shape, start marching towards the Sultana. It matters not which side you are taking, but the northern side is where the Shah likes to attack. If you catch him with his catapults, you might have an easier time with the siege as the catapults grant you a path through the walls.

Have your units push back the Sultana's troops and they should finally arrive under the walls. A tower mangonel will hurl rocks at them, but your units should survive its suppressing fire. Destroy it if you want, but you can also proceed to knock a hole in the wall line and move in. Beware of the southern side's haybale launcher: it is surprisingly accurate and its fire will destroy any units caught in the fire. Try to avoid it. 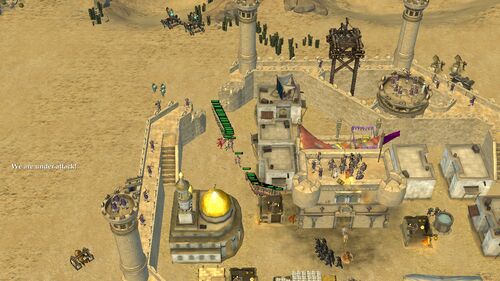 Carefully manuveuring around, the Sultana should wait you on her keep. Fight the bodyguards and she should fall before your might! Well-deserved victory.

Retrieved from "https://stronghold.fandom.com/wiki/Walkthrough:The_Iron_Hills?oldid=16689"
Community content is available under CC-BY-SA unless otherwise noted.