This is mission 3 in the Stronghold Crusader 2 skirmish trail, Breath of the Infidel.

Welcome to one of the most economically unfair challenges. Do you remember the map from "Over the Mountain"? If yes, you can relate to something similar because this time you take the poor western estate, while the Slave King is bathing in resources. Not only has your enemy 6 times (!) your starting gold, but you also have virtually no resources. Prepare for the hardest 4-5 minutes in the game.

The map is described as very unfair. It is cut in half by water and natural blockades, granting a pathway between the two sides on the top of the map. This northern estate is rich in iron and stone, as is the southern estate. The western estate has no ore deposits, but it has three puddles of pitch. The western position is heavily disfavoured in terms of balance and therefore provides a bigger challenge for its occupant.

Needless to say, you start in a very dire position. Fortunately, the starting stocks give you everything you need. As you are going to be the defender for the majority of the game, you will need far less to gold to operate against the Slave King than him. Getting the right strategy is crucial, as the Slave King's attacks might overwhelm your modest defenses and send your economy into oblivion if not done right.

Either way, notice how you have no resources, only oases and pitch fields. You can afford expensive units such as Arabian swordsmen, but they will not be able to stop raids. Instead, we will play with the Slave King's mind and survive with cheap units for the first few minutes. Site the stockpile to a convenient position, followed by the granary and two wheat farms. Buy enough wood for a mill, a hovel, two fletchers, one poleturner and the armoury. Place the barracks as well and spend the remaining wood on woodcutters. You might need to buy in more wood for an extra hovel. Have small taxes (level 2) while there is extra food in the granary. 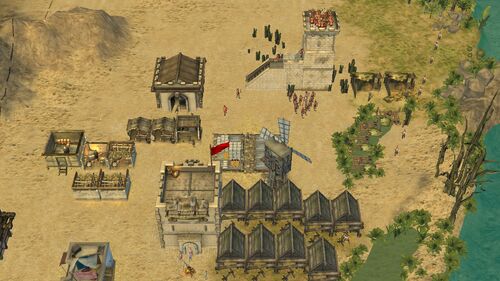 For defensive purposes, site a medium tower just north from you and stairs next to it. The idea is that we are going to defend from two places:

Following this principle, locate and send your troops to convenient locations. Don't bother with mercenaries: your weapons production will suffice for the task and you will not have enough money for them anyway. Keep those units coming whenever weapon is ready in the armory; if you can't afford either of them, hire conscripts.

The Slave King's first attacks will arrive: a siege unit and a slave group. These vanguards will be pinned down first by an outpost north from you: although the camp produces Arabian swordsmen and Arabian bowmen, they will be outgunned and removed by the growing number of orange raiders. Eventually, they will have cleaned up everything and move towards you. Keep the shock unit at hand and rush out to defend beneath the tower. Only use the men-at-arms if their javelins have been thrown. Nasty catapults might get a shot or two off, but your tower should barely suffer damage and the siege equipment should be dealt with fast.

Extend your economy as wood comes in. 4 bakeries will be enough to sustain the food production for a while, but notice how you lack hard cash. Fortunately, there are the marshlands we told about earlier. Start populating it with rigs and sell all pitch that comes in. Buy in wood for additional rigs and hovels when you have no units to recruit. Each marshland can support up to 4 rigs. 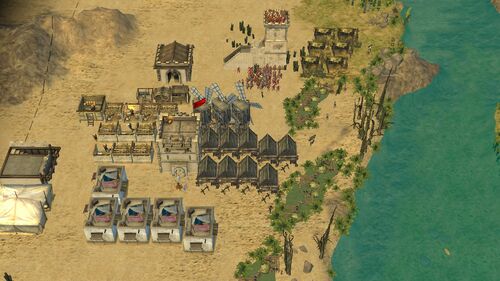 The Slave King's relentless attacks might have an impact on your defenses. While slaves are somewhat insignificant, groups of Arabian bowmen will pick off a few archers in the tower. Charge out with the rapid response squad to clean them up if they are overwhelming your ranged units. 20-25 archers should take care of these attacks.

The Slave King will have used up most of his money after a short while. When the attacks lighten somewhat, start building an offensive army. The healthy profit from pitch should allow for mercenaries, namely Arabian swordsmen and Arabian bowmen. Also build more bakeries and wheat farms for more bread. You can populate the area with additional woodsmen, quarries, etc., however it is best to stay safe within your own boundaries.

When you have about 25 Arabian swordsmen and a bunch of other units, you are safe to move out. Bring everyone to the fore and quickly scale the ridge. The Slave King's small force will pose little threat on your superior numbers. Have your army move on the enemy's side on the highground and unleash fire on the quarry site. The Slave King will send patrols there but your units will pick them off from outside range. Keep up the contain until the patrols cease to come. 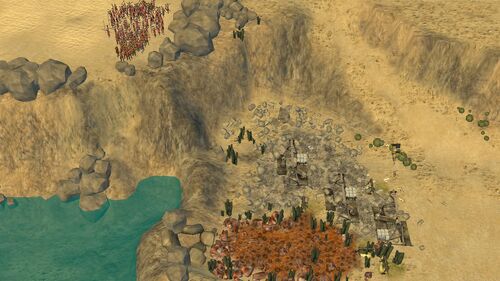 Afterwards, move down the steep and start sieging. Lead the charge with the swordsmen, who will draw fire from the defending ranged units, then move in your own archers and pick off everyone in sight. Your archers and men-at-arms may all die to the overwhelming rain of arrows, but just keep reinforcing. You will need these units against the whirling dervishes, who are very dangerous with their spins.

The swordsmen should head for the outlying towers and clear them. Arabian bowmen will relentlessly fire at your troops, even lighting up pitch ditches around. Be careful and try to avoid them. Make a beeline to the enemy granary and mercenary post to paralyze the Slave King's economy and military. He may even do a favour for you by lighting up his own buildings. 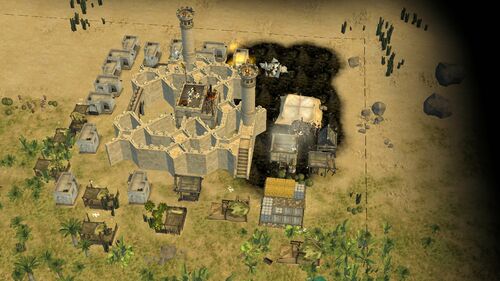 After the outside area is clear of troops, move in and remove the defenders first, then on to the Slave King. He might even come out and fight you in the open, making it easier to remove him from the fight. When he is dead, you finish the mission and unlock a new skirmish trail. Victory!

Retrieved from "https://stronghold.fandom.com/wiki/Walkthrough:Thorn_in_Your_Side?oldid=17042"
Community content is available under CC-BY-SA unless otherwise noted.