Start a Wiki
This is mission 12 in the Stronghold 3 military campaign.

Your triumph over Swinefoot is short-lived, as he was merely a diversion from The Wolf's march against Lady Catherine. Worse to come, the main forces have surrounded her, who has limited time until captured and finished off. You must take a castle and relieve her by breaking through the siege camps.

Your castle is located in the bottom left with a limited number of buildings. Lady Catherine must be rescued in fifty days (her castle or encampment is not visible on the map) by disposing of the siege camps the enemy has deployed. Worse yet, the enemy is prone to send attacks against you, which makes a frontal assault even harder.

Another time-limit mission. This time, you have to build a stable economy and muster enough armoured forces to break the siege.

The starting location has a few interesting traits. First of all: you start with a naturally defensible location, with already established defenses. Your food production is however lying outside, so far far away from harm. Next: the Pilgrim's Cross (the place you need to go to) lies in a strait, where the enemy laid numerous camps. They are pretty fearsome, however we will devise a plan and break through.

You have food production and some civilian buildings already built, along with an iron mine. Still, you have to build up your town inside the castle, where sometimes it can become problematic to fit all buildings. You will find however that pressing the issue is not urgent, yet you will need gold more than ever due to the expensive units you are going to field. 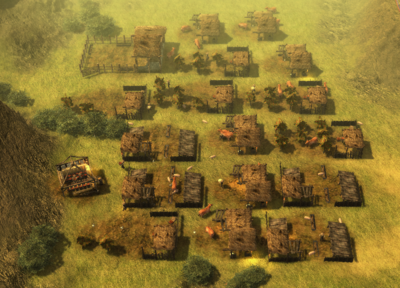 Build up iron production by fitting mines and oxen to the iron deposit in the west. You can omit stone production (detailed later), however feel free to add a quarry with its own ox. Add three or four armourers near the armoury, add large hovels near the keep and build two wood camps near the quarry area. The southern part should be preserved for production facilities, the area northeast to the keep should house the banquet buildings, while the north has houses (try to fit them closest to the keep, if possible). Group all defenders around the northeastern walls. Add a few more farms next to the existing ones.

The first fifth of the mission is about getting economy going. Since you will produce expensive armoured units, you will need plentiful gold and you have to squeeze every bit of them out of the peasants' coffers. This can be achieved by mass production and taxing, which involves establishing popularity. Selling food will help in the long run, however small taxes will be necessary and sometimes you will even need to buy in wood to build more buildings. Moreover, you can get crossbowmen, which are invaluable in defense, however their weapons can only be bought, not crafted. 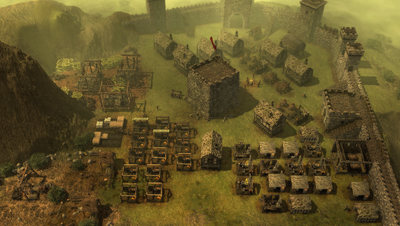 Notice how you get a large pile of ale and candles. 500 of each will ensure you do not need produce any for quite some time, however you will eventually need some (or both) to get popularity. Religion is easier to cover and provides more popularity for your buck. Candles also sell nicely if overproduced.

Invasions are fairly strong, however only a handful of them will strike, rather early on. About two siege camp attacks will hit your castle, while one will target your food industry. If you have troops ready, they will be dealt with soon enough.

The blue forces will attack with archers, swordsmen and a few [[catapult]s or trebuchets. Like previously, you get an engine tower where you can conveniently place a ballista; you can even build some now if you want. As told before, crossbowmen will be essential in removing enemy armor, and you have to buy in quite a few crossbows from your hard-earned income. Thankfully, they are not as expensive as armor or swords, so you can buy only these while your armorers craft plate armour. Manually target your ballista at any deployed siege engine.

The second attack will be directed at your granary. Deploy a few knights and swordsmen here to guard your territory, preferrably with some crossbows.

You break the siege by getting the Lord to the signpost near the Cross, which is found behind the enemy camps in the valley. You will need a good-sized army to break through it, particularly as numerous swordsmen, archers and crossbowmen have set camp.

Simply sit back and recruit your forces. Get lots of swordsmen, crossbowmen and a few knights. Hold banquets and sell food with iron. You can even buy in equipment to accelerate production. When the scribe tells you about moving out, you should launch your attack.

Have around 60 swordsmen and a few other troops. The starting archers along with crossbowmen greatly help thin out the garrisons. Blue archers will be a nuisance, however you will just steamroll the enemy opposition camp by camp. Follow with the Lord, when the coast is clear, and win the mission! Now on to Lady Catherine.

Retrieved from "https://stronghold.fandom.com/wiki/Walkthrough:Trapped?oldid=20972"
Community content is available under CC-BY-SA unless otherwise noted.