Start a Wiki
This is mission 15 in the Stronghold 3 military campaign.

With the Jackal's and Earl Swinefoot's siege on the impenetrable fortress repelled, the Pigs have pulled back to the haven of their father's former castle. As the Jackal is desperate to tell the Wolf about the happenings, your arch-enemy decides that it is time to take matters in his own hands. In the meantime, you seize the golden opportunity and set out to erase the Pigs from this land forever.

Similar to Vermin's Rest, this mission is a build-then-conquer type. It puts you against the combined stronghold of the two Pigs on a hilltop, who conduct weak raids against you until Swinefoot (in blue) is dealt with. Redham is a very defensive one, however he will launch counterattacks against you as you get close to him. You start on a peninsula on the valley floor, where stone, iron and trees are abundant.

This mission is a breather compared to the previous one, again giving you full control over troops and economy. The only unit you cannot build is the knight, however he is not required at all for besting the pigs.

As you might already know the drill, the first few moments are about building up. There is a twist however, as the first attack comes as soon as the mission starts. Pause the game and ready a round tower with some walls and stairs, then choose your starting archers and macemen and send them to the tower. Swinefoot attacks with a handful of archers and pikemen of his own, but this attempt should fall short to your improvised defenses.

Now back on topic. Build three wood camps, add a widespread food production, build lots iron mines and start producing bows, crossbows and swords along with metal armour. Archers are nice due to their long range, crossbowmen help eliminate armor and swordsmen hold up enemy advances. Your industry should cover the usual parts of economy, however you might find that land is a bit limited. Producing banquet goods is favourable as always, as in case of honor abundance you can just sell everything for nice cash. It is advised to cover religion for a steady popularity bonus. You may even experiment with entertainment, if you want.

Park all new units at your tower. Swinefoot will keep sending groups similar to the starting one, as well as Redham will attack once, who brings a few swordsmen. You will quickly realize that Swinefoot's stronghold is rather weak, so spare some gold for a siege camp and start adding trebuchets to your attack. Unpack them in a comfortable range and bombs away! Rocks deal radial damage so you can pick off units on the ground as well, not just on the walls and towers.

While your trebs are busy pounding the area, move up with your troops. Swinefoot's macemen and archers look menacing, but your siege engines should soften them up. Your superior numbers steamroll anything thrown against them, however be wary that at various points, Swinefoot will send out small armies against you. After these are gone, just move up to the walls, and mind no casualties. Swinefoot's regular attacks cease once you moved up to the slope. Bring new reinforcements on the battlefield.

To dispose of Swinefoot, kill his Lord kneeling at his campfire. He is a sitting duck in lieu of a proper defense, however once you kill him, you will not gain his estate and his units will remain hostile. Kill them to swat off unpleasantries.

Redham has a much more developed defense compared to his brother, featuring multiple layers of stone walls, tall towers and even a mangonel. Your trebuchets are invaluable in killing off the outlying defenders, as you can just set up camp at the foothills and bombard without fear of retaliation. Start the siege from Swinefoot's former encampment, then move up to the hovel area.

It is imperative that you make the frontline barren. The top of the slope is covered in pitch, and the enemy archers will not make a mistake waiting to light it up. Your trebuchets should reach everything in range. This will trigger a counterattack from Redham, however you also get reinforcements at the hovels, including three knights! Try not to lose your trebuchets, but you can simply remake them anyway.

When the mangonel line is history, move up. You can move the trebuchets too and bombard the gatehouse, as the front is also hiding a pitch trap, however you can just trigger it with your troops. You should have so many troops that your army can just move through. Another counterattack from Redham when you get close, however they are insufficient to take you. Outgun enemy archers and crossbowmen, then kill the lord and enjoy the victory! 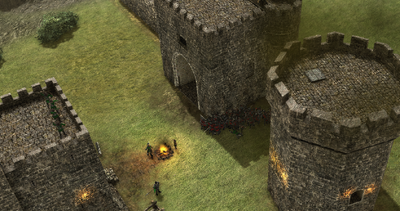 Retrieved from "https://stronghold.fandom.com/wiki/Walkthrough:Two_Little_Pigs?oldid=20988"
Community content is available under CC-BY-SA unless otherwise noted.