The war wolf 'is a siege engine and an upgraded variant of the catapult.

The war wolf is a stone-hurling machine that bears the characteristics of the catapult. In fact, it works exactly the same way as one would, but it is designed to be massive and durable to withstand even the biggest attacks coming to its way. The war wolf is huge in size and thus able to catapult its projectiles over a long distance but a low arc, delivering accurate strikes to structures. Be it a rock or a carcass: the war wolf can do its job with both.

The war wolf is designed to deliver the heavy punches to fortified positions and resist projectiles from mangonels and ballistae, as well as foot soldiers on the walls. It has lower firerate than the catapult, but it is arguably the hardest siege engine to destroy. Well in guard of the rear lines, the war wolf is nearly impervious to attacks and is able to accomplish the same task that would take a much bigger number of trebuchets or catapults..

War wolves perform excellent against any structure, but particularly against walls and towers. Their ability to level anything in only a few hits makes them the ultimate siege engine. They are very slow to move around, but their destructive abilities more than make up for it.

The war wolf is the most expensive siege unit in the game, making it incredibly hard to afford and construct.

While the wolf itself has very high health, it falls short against concentrated fire and melee attacks. Also, the war wolf has terribly low firerate and its anti-infantry capabilities are close to none, particularly in close range. As a result, it requires protection from troops all along and great positioning, as it is very slow to move and turn. 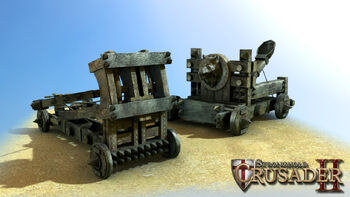 Retrieved from "https://stronghold.fandom.com/wiki/War_wolf?oldid=21486"
Community content is available under CC-BY-SA unless otherwise noted.