A woodcutter works at the hut, who seeks for nearby trees and cuts them, then delivers his chopped logs at his workplace. Logs are sawed into planks and taken to the stockpile afterwards.

Wood camps are one of the most essential buildings, since wood is needed for most buildings and weaponcraft, namely: food buildings, resource gatherer and producers and farms. Although wood is available from the market very cheaply, an abundance of woodcutters early on is the best foundation of establishing a stable economy. Even later on, when extension of the industry slows due to an already running economy, wood is useful in constructing ground defenses, such as killing pits.

Claiming forests/wood is often a good strategy to secure production and fast expansion. Minimizing the distance between the stockpile and the forests is needed to ensure faster delivery, particularly when an array of trees have been cut out near the camps. 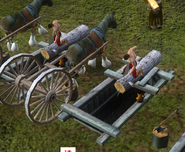 A pair of Saw Pits
Add a photo to this gallery

Retrieved from "https://stronghold.fandom.com/wiki/Wood_Camp?oldid=18384"
Community content is available under CC-BY-SA unless otherwise noted.